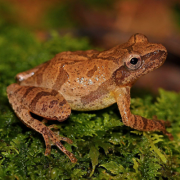 Identification:
The spring peeper is a small tree frog that ranges from 0.98 to 1.5 inches in length at maturity. Their coloration ranges from shades of brown to dark gray, but temperature and other conditions can cause this coloration to vary. A distinct X-shaped pattern on their back makes this species easy to identify. Female spring peepers tend to be slightly larger and lighter in color than males. Males have a flap under their throat where the vocal pouch is located. This flap can be darker during the breeding season, when the males are calling to attract mates. 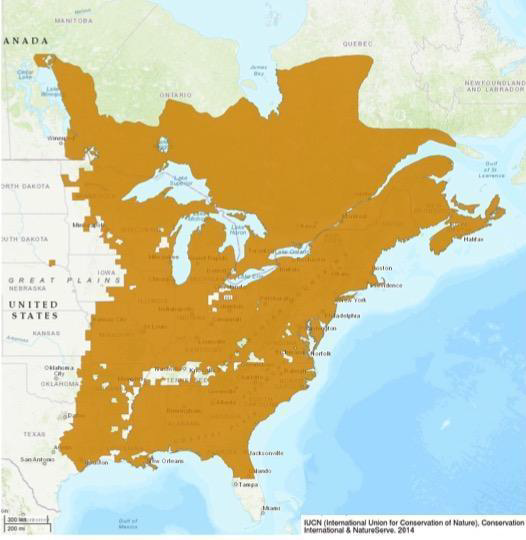 Range:
Pseudacris crucifer is native to eastern North America, and they can be found from Manitoba, Canada to Florida.

As their common name implies, males make a chirping call in spring to attract a mate. Spring peepers are among the first frogs in the region to vocalize in the spring. Females lay between 750 and 1300 eggs. The eggs are laid in small clusters under vegetation in a wetland. Once the tadpoles hatch, they take 2-3 months to transform into a frog and move out of the aquatic habitat into the forest.

Spring peepers start breeding after their first year. Females are attracted to males with a certain volume and speed of call. Older and larger males have faster and louder calls, which are considered more attractive by females. Some males called “satellite males” do not make calls but position themselves near calling males to intercept females. Not all calls made by spring peepers are for mating. They also vocalize when fighting, after rain, and before hibernation.

Special Notes:
Here in Bella Vista, spring peepers are the first frogs we will hear in spring. You might think you are hearing sleigh bells or car alarms, but when you hear the telltale “Peep peep!”, it means the spring peepers have come out of hibernation and spring has arrived.