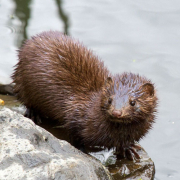 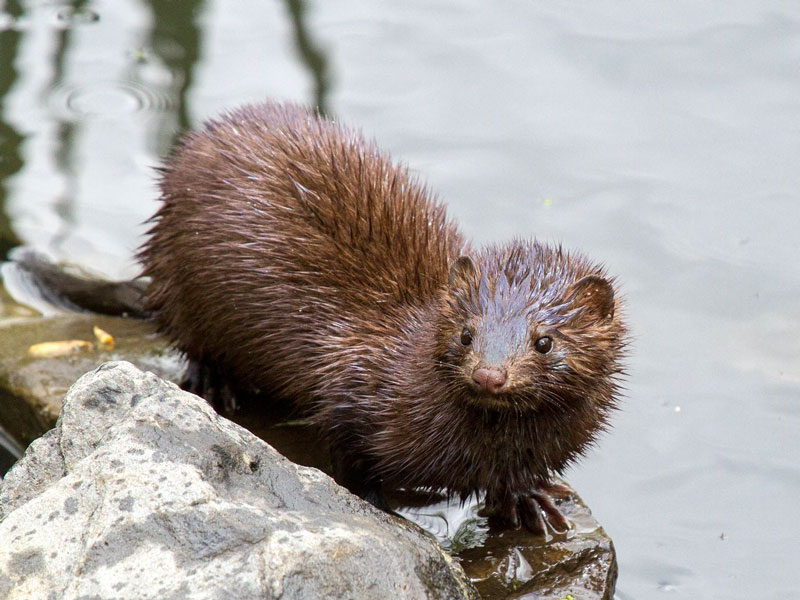 Identification:
The mink differs from other similar species like weasels and stouts by its larger and stouter frame. Mink have a long, sleek body about two feet long with short, stubby legs, a long neck, small ears and eyes, and a long, thick tail. Coloration in mink vary from brown to black fur with white fur on its chin and throat. The mink’s fur is soft and thick, and it is covered with oily guard hairs, which make the mink’s coat waterproof. Since the mink spends most of its time in the water, its thin and tapered body and slightly webbed feet help it swim quickly through the water.

Range:
Mustela vison can be found throughout most of the United States and Canada.

Ecology:
American mink are known to be fierce predators, and they defend themselves from other predators like coyotes, bobcats, and birds of prey. They have developed ways of avoiding predation such as their secretive nature, coloration, agility, and limiting most of their activity between dusk and dawn, when their coloring makes them less visible. The American mink is a carnivore that feeds on smaller rodents, fish, crustaceans, amphibians, and birds. It kills vertebrate prey by biting the back of the head or neck, leaving canine puncture marks. The American mink often kills birds, including larger species like seagulls and cormorants, by drowning. In its natural range, fish are its primary prey.

After mating in winter, female mink give birth to litters around April or May. The litter size can range from one to eight, with each newborn weighing less than half an ounce. Young are weaned at six weeks, but they do not become independent until ten weeks. Staying with their mother until fall enables the young to learn how to escape predators and catch prey. Once the young leave, they must establish their own territories, because mink are solitary and territorial animals.

Although American mink are hard to catch, they were among the most frequently trapped furbearers. They are also commercially farmed. Mink are legally trapped from early November to early April, when their pelts were in their best condition.

Special Notes:
Here in Bella Vista, mink are common and can be found around all our lakes and along Little Sugar Creek. They can be seen frequently along the shores of Loch Lomond, and near the walking bridge of Little Sugar near the Walgreens.