Giant ragweed is in the Asteraceae family, the second largest family of flowering plants, and is in the genus Ambrosia, which is composed of different ragweed species. Ragweed species originated from the United States where this genus holds the largest diversity. Species in this genus share characteristics of being monecious, meaning they can only reproduce by pollination and cannot self-pollinate like some other flowering plants. They have inflorescences, or flower clusters, that are spikes in shape with some smaller flower spikes around the base.

Giant ragweed grows between 3 and 12 feet tall depending on the soil nutrients. They have many branch stems that come from the central stem in an opposite formation. The branching stems are green, and the central stem is green with purple, both are covered in white hairs. Giant ragweed has two types of simple leaves. The mature leaves are 12 inches long and 8 inches wide and have 3 to 5 lobes with serrate margins, while the newly emerging terminal leaves are lanceolate. The upper stems of the plant terminate into cylindrical, spiked female flowers that are 3 to 6 inches long and produce seeds once pollinated. These flowers are yellow-green and have no petals or sepals. Additionally, the plant has smaller spiked male flowers that cluster around the base of the terminal flower and release pollen. 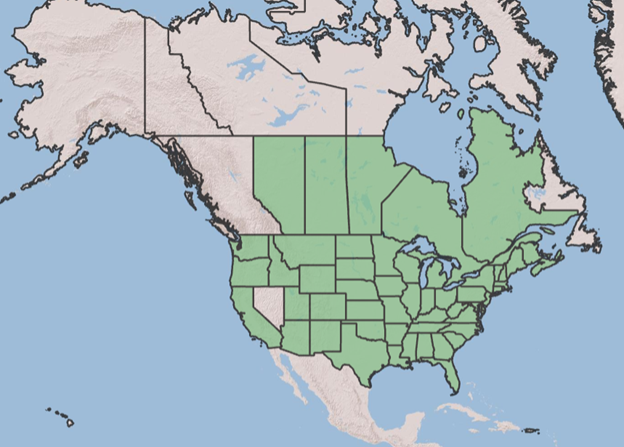 Giant ragweed is native to most of the continental United States excluding Nevada.

Giant ragweed prefers moist soil which is fertile or loamy as well as partly shady. However, they can also tolerate clay or gravel soil in dry conditions and full sunlight. It can grow taller in its preferred conditions and can easily reach heights up to 12 feet. Giant ragweed is commonly found along woodland margins, moist clay prairies, near rivers, and thickets. However, it can also be found in vacant lots, cropland, abandoned fields, poorly drained waste areas, roadsides, railroads, and fencerows.

Giant ragweed is an important food source for insects and indirectly helps insectivorous migrating songbirds. Since giant ragweed is a wind pollinator, pollinating insects are not normally attracted to its flowers. Instead, the primary consumers of giant ragweed are insects with piercing mouthparts which drink the juices in the ragweed’s stem. For this reason, giant ragweed attracts migratory songbirds which eat insects that congregate on this plant in the fall, including indigo buntings, song sparrows, white throated sparrows, American redstars, and yellow warblers.

Giant ragweed can provide habitat and food for a small handful of mammals or birds. Mammals generally avoid eating giant ragweed because it is bitter. However, some vole species will eat their roots. The seeds of ragweed are tough and hard to digest so are avoided by most birds, but the Northern bobwhite quail, mallard duck, and greater prairie chicken do eat them. Since it grows in herbaceous patches, it can be used as habitat or cover for small mammals avoiding predators.

Here in Bella Vista, giant ragweed is found most predominantly along forest edges and newly disturbed areas such as drainage ditches. It is among the first colonizers to return to powerline easements after tree and brush removal. Ragweed is rarely found in open fields.

Native peoples used preparations from the leaves and roots as astringents, skin disinfectants, fever reducers among other things. The plant is edible, but extreme care should always be used to identify wild growing plants.

Giant ragweed grows in close association with one another and can easily grow in shaded and moist disturbed locations. For this reason, they can be good to keep because they can help combat erosion of soil in drainage areas. It is also a notable seasonal allergen because of its wind-born pollen.