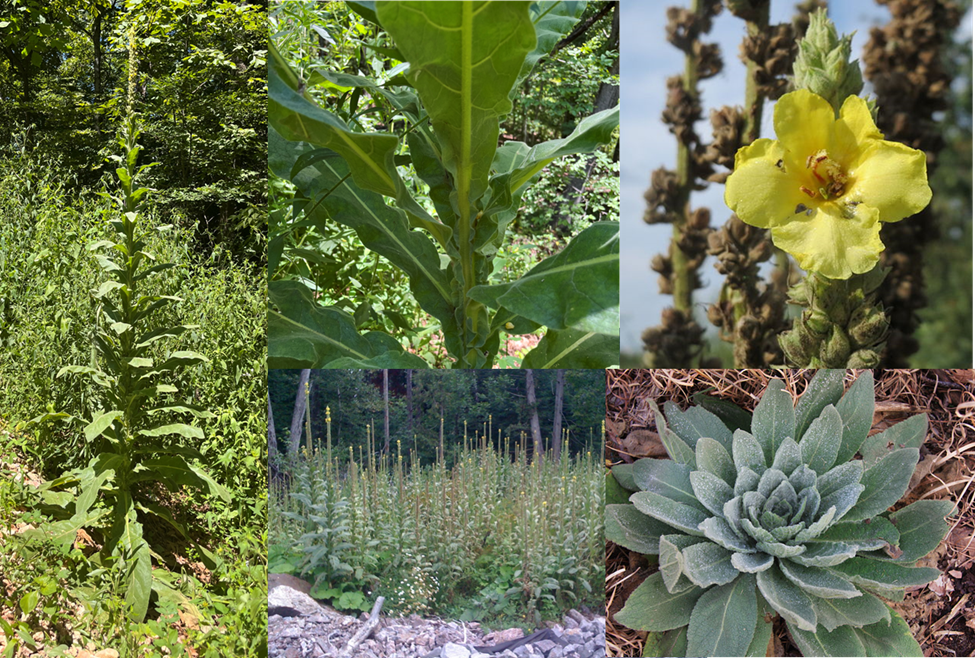 Mullein is in the family Scrophulariaceae commonly known as the figwort family. Their defining characteristic is having flowers which are zygomorphic, or having bilateral symmetry, which means that when cut in half vertically the petals are mirror images. It is in the Genus Verbascum, which is composed of over 450 mullein species. Species in this genus, form as a rosette of leaves on the ground, which later send up a tall flowering

Common mullein is a biennial plant and completes its lifecycle in two growing seasons. In its first year, the plant is a low-growing, vegetative rosette. Leaves of the most common species appear hairy, are felt like to the touch. The leaves are oblong-to-lanceolate in shape and mature at 4 to 12 inches in length and 1 to 4 inches in width. In the second year, a stalk grows from the base and reaches heights between 5 and 10 feet. The leaves alternate and switch sides of the steam as they grow and decrease in size as they ascend upward. The leaves are cauline and grow directly from the steam without a petiole.  At the top of the stalk there are yellow flowers with 5 petals, which are grouped densely on leafy spikes.  The plant’s flowers open 3 to 5 at a time and open in the morning and close mid-day. The stalk length on this plant is indeterminate and based on nutrient conditions.

All species in this Genus originated from Europe and Asia, with two being very common and widespread throughout the United States: moth mullein (V. blattaria) and common mullein (V. thapsus). Moth mullein is not easily confused with common mullein since it is much shorter and does not have hair like structures on stems or leaves. 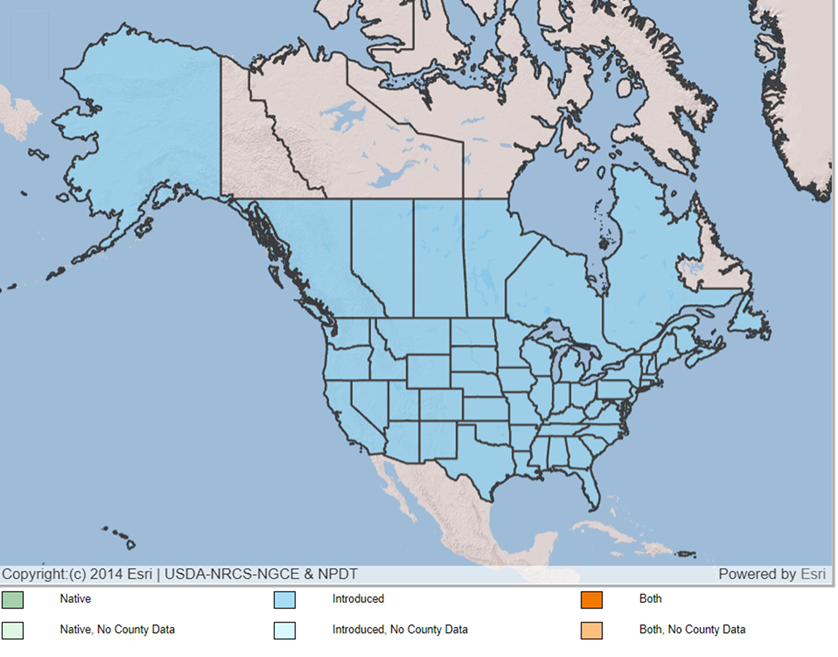 Mullein is native to Europe, North Africa, and Asia. It was first introduced into North America in the 1700’s. It had become so well established by 1818, that it was listed as a native species in books written about East coast flora in North America. By 1839, it had reached the Midwest and by 1876, it had expanded to the Pacific coast of the United States and Canada.

Common mullein blooms throughout the summer from bottom to top. Mullein is most effectively pollinated by bees, as their flower morphology does not accommodate other insects as well. Alternatively, they are autogamous, which means they self-pollinate just prior to closing, if not accomplished by insects. The flowers produce a fruit shaped like a round capsule, which splits in two when matured. Each plant creates 100,000 to 200,000 seeds and mature seeds fall a few feet from the parent plant when the stalk is moved by the wind or a large animal. Common mullein does not have a method to disperse seeds over long distances, so populations tend to grow in dense stands.

Common mullein can be found in a variety of soil types but are very shade intolerant. Its deep taproot allows them to live in low water environments. Mullein does best in disturbed soil, as disturbed soil brings seeds from the under layers to the top. The seeds need plenty of light to germinate, so they need to be near the surface. If they are buried, they can remain viable for decades. Populations of common mullein often reappear in soil that has been recently upturned, or the top layer eroded away. Localized populations can be short-lived in undisturbed areas where they disappear into the seedbank until the next disturbance. Common mullein is common in neglected meadows, pasture lands, along fence rows, roadsides, vacant lots, wood edges, forest openings, industrial areas, powerline right of ways, and along open riparian corridors. Interestingly, common mullein can increase soil quality over time, since they have a deep root that can help break through and aerate compacted soil. Additionally, after their second year of growth, they die and compost into the soil adding nutrients to the top layers.

Mullein is an interesting plant historically, as it was brought to North America in the 1700’s for its pharmacological uses. It has been used to treat respiratory ailments, skin issues, digestion problems, hemorrhoids, sore throat, coughing, muscle and joint pain, insomnia, allergies, ear infections, asthma, migraines, inflammation, gout, and constipation.  The leaves have been used for at least 2,000 years and go back as early as first century Rome. The leaves are steeped into tea as well as used to create extracts and syrups. The seeds contain rotenone, which is widely used as a pesticide as a fish toxicant.

Here in Bella Vista, mullein is very common along roadsides or newly disturbed lots where seeds have been brought to the surface layer of soil. It can sometimes be found along streams and on dams of our lakes.