Painted buntings are songbirds in the cardinal family (Cardinalidae). They are often regarded as the most beautiful bird in North America and are given the nickname nonpareil meaning “without equal.” In the second year of life, the male comes into his breeding colors with a dark-blue head, green back, red bottom, and red chest. The females and juvenile males are a vibrant green and yellow color which helps them to camouflage.  They are 4.5 to 5.5 inches in length and weigh about half an ounce. They have a wingspan of 8.3 to 9.1 inches. 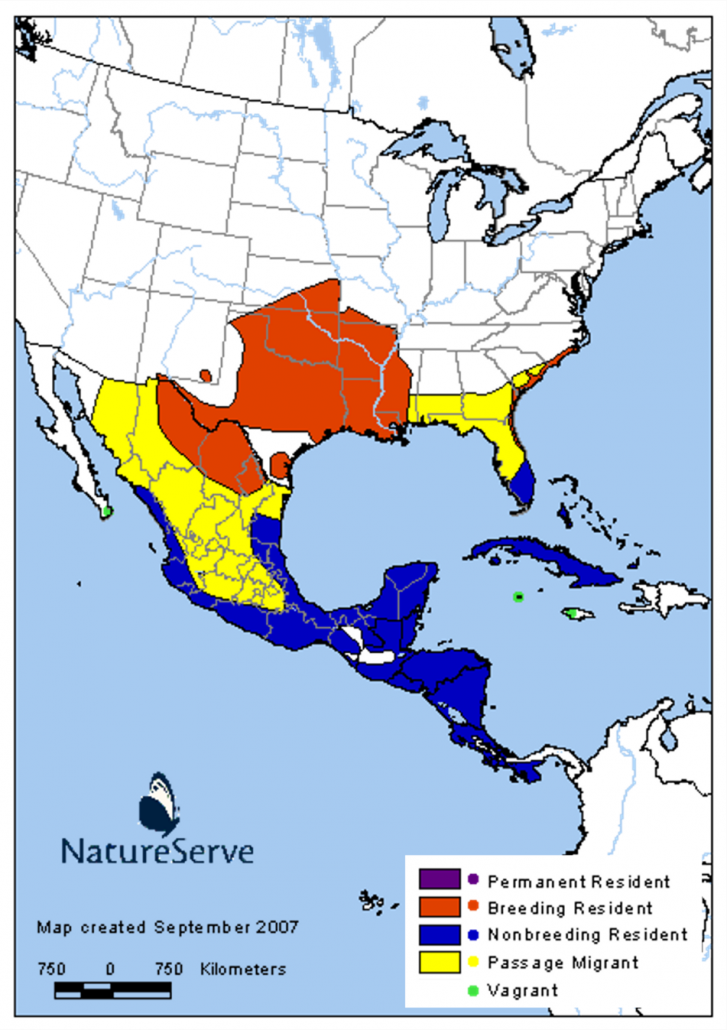 Painted Buntings mainly feed by hopping around and foraging for food such as seeds of grasses, sedges, and forbs.  In the winter they exclusively eat seeds.  During breeding season, especially when females are nesting, they seek-out small invertebrates such as spiders, snails, grasshoppers, and caterpillars.  Interestingly, they sometimes pick off insects caught by spider webs.

Mating season begins in late April and extends through the beginning of August, but most activity occurs mid-May to mid-July.  Males arrive one week prior to females to establish territories.  Males are most visible during mating season as they sing on exposed perches to advertise their territory and alert females of their presence.  In addition to singing, male buntings will fly in a bouncing manner that is similar to butterfly flight.  They also have an upright display of fluffing feathers, bowing, and wing quivers that are used to attract females.

Females weave their nests into low, dense vegetation.  Each brood is around 4 eggs which are grey-white with spots of brown.  The female incubates the eggs for 10 days.  Young are born underdeveloped “altricial” and require parental care.  Females alone will care for the young after hatching.  Young fledge 12 to 14 days after hatching.  Females lay another brood 30 days after the first set hatches.

You can see Painted Buntings along roadsides, on forest edges, and in gardens.  The males are especially noticeable at the peak of their mating season when they display for females.  Painted buntings stay in Arkansas from late April until August and begin migration to their wintering habitat late August to early September.