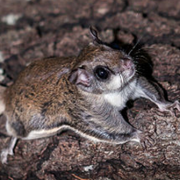 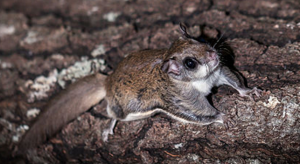 Identification:
Southern flying squirrels are the size of a chipmunk, between 8 to 12 inches in length, with tail, and weigh 1 to 5 ounces. Their fur is soft and silky with a gray-brown overcoat and white undercoat. They are distinguished from the grey and fox squirrel by their larger eyes, longer limbs, and flaps of skin between legs that allow them to glide. These skin flaps (pataguim) run between the front and back ankles. Smaller back flaps also connect their back ankles and tail. Additionally, the hair on their tails is fanned out horizontally to aid in gliding. There is no difference in appearance between males and females. 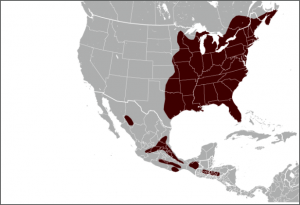 Range:
The southern flying squirrel is native to the eastern half of the U.S. and some parts of southeastern Canada.

Ecology:
Southern flying squirrels favor large dense deciduous oak-hickory forests with full, mature trees and are especially numerous near water. More specifically, they prefer old forest with dead or rotten trees to nest in. They can fit into a hole the size of a quarter, so have a lot of options for dens. They nest high in trees in hollowed out holes which are usually old woodpecker dens. They can have 4 to 6 kits in the spring and sometimes another litter in late summer. Individuals usually live 5 to 6 years.

Southern flying squirrels live in the same habitat and eat the same food as Fox and Grey squirrels, so to reduce resource competition, they forage at night when these other squirrels are sleeping. They forage for nuts, fruits, buds, tree bark, and mushrooms like other squirrels. Unlike the Fox and Grey squirrel, they eat moths and beetles regularly. They are especially adept at helping to reduce beetle infestations in bark.

Since they forage from the tree canopy to the forest floor, they use large flaps of skin to glide which aids in forage speed. The Southern flying squirrel glides by fanning out its body to reduce falling speed and alternately moving their front and back legs to control which directions they fall.

Special Notes:
Here in Bella Vista Southern flying squirrel enjoy our mature woodlands with plenty of woodpecker holes. They can be hard to spot due to their nocturnal nature. Be prepared for some nighttime excursions if you want to see one!