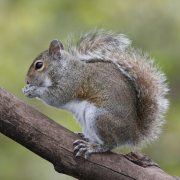 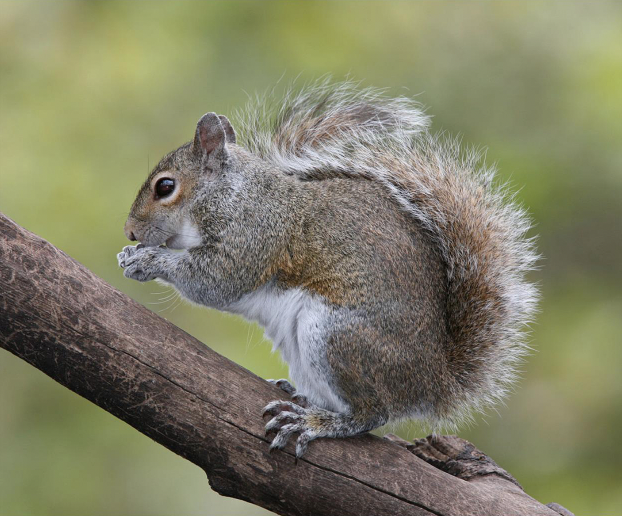 Identification:
The eastern grey squirrel is gray as the name implies with a white underside. The fur can sometimes have hues of brown. White and black color variations are possible and are more common in urban areas where predation is low as they are more visible to predators. Southeast Canada has a melanistic dark black morph that can tolerate colder climates. Grey squirrels are typically 9 to 11 inches in body length with a tail ranging from 7 to 10 inches. There is no difference in appearance between males and females. Their incisors undergo indeterminant growth, meaning they will continue to grow throughout their lives. The eastern gray squirrel can be distinguished from the fox squirrel by their white underside and generally smaller stature.

Range:
The eastern gray squirrel is native to the eastern half of the U.S. and southeastern Canada.

Ecology:
Grey squirrels prefer large dense deciduous oak-hickory forests with full, mature trees. However, they are adept at living in suburban and urban environments alongside humans. They create temporary nests called a drey. Dreys are large spherical collections of sticks and leaves usually in the fork of a tree. They are insulated with moss, thistledown, dried grass, and feathers. They can also den permanently in hollowed-out tree trunks or tree branches. Eastern gray squirrels sometimes share their drey or den with other squirrels to maintain body heat in the colder months. Eastern gray squirrels are the prey of many predators, including hawks, owls, bobcats, foxes, weasels, cats, dogs, snakes, and humans.

Grey squirrels are crepuscular, meaning they are active in the morning and evening. During these times, they actively forage and store food in caches. They maintain caches in many locations and use their accurate memory to locate their previously stored food sometimes many months later. Squirrels use smell to find their own caches or pilfer other squirrels’ caches. Smell relies on moist conditions, so it is not effective in dry or snowy environments. If grey squirrels observe another creature watching them while hiding their food, they will pretend to store the food in the cache but hide it in their cheeks instead and find a new spot. They consume hickory nuts, walnuts, hazelnuts, and acorns. In urban areas, they steal birdseed from backyard bird feeders.

Grey squirrels live on average 6 years but have been known to live 12 years in the wild. They reach sexual maturity at 1 to 2 years of age. Mating seasons are from December to February and May to June. Females will typically raise 1 to 2 liters per year, with younger squirrels raising only one liter in the spring and more mature females producing liters in spring and summer. The presence of fertile males in an area will induce females to undergo estrus. In addition, if a mother squirrel loses her young, she will undergo estrus, which can attract males from up to 500 meters away. Gestation takes 44 days. Young are born blind, with closed ears, and without hair. Litter size is typically 1 to 4, but up to 8 kits. Young leave their mothers at 12 weeks of age.

Special Notes:
Here in Bella Vista, grey squirrels are found everywhere. They are adept at pilfering food from bird feeders. Close association with people also provides some protection from predators. Some may even become unwanted house guests, making nests in attics or sheds. They are a very prolific species, providing food for many predators.