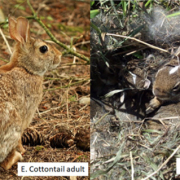 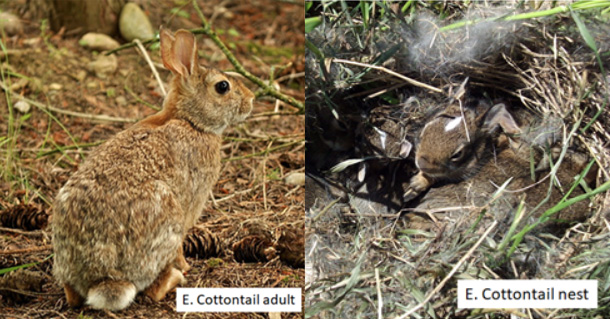 Identification:
The eastern cottontail is the most common rabbit species in North America.  Its fur is grey-brown or red-brown with white fur on the underside.  They have large hindlegs with long ears, and a short white fluffy  tail with a rusty patch on the top.  They have large distinct black eyes.  The males tend to be larger than the females but there is overlap in size.  Typically, they range in size from 14 to 19 inches in total length.  The young are called kits.  They have a white blaze on their forehead for the first few weeks of life. 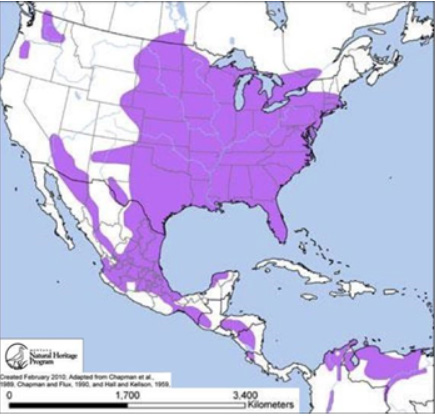 Ecology:
The eastern cottontail primarily lives in open grassy areas, clearings, thickets associated with fence rows, and old fields with shrubs on the edges.  You can find them along hedges and fences in suburban areas and on the open edges of forested areas.  Their diet primarily is composed of grasses and herbs and the occasional insect.  Eastern cottontails’ typical range is around 1.5 acres, but some adults have been observed traveling up to 40 acres for adequate food.  Males typically have a larger home range since they actively search for females.

Cottontails are an extensive food source for most predators including cats, dogs, foxes, coyotes, racoons, minks, hawks, snakes, owls, weasels, bobcats, and corvid birds (e.g., crows & magpies).  They tend to live in grassland with shrubs, fence lines, or debris nearby to use as cover when predators (or perceived predators) approach.  These rabbits run up to 18mph in a zig-zag pattern to confuse or out-maneuver their predators.  Sometimes, they will freeze when approached to blend into their surroundings since often predators are more likely triggered by a moving target.  Similarly, they tend to rest during the day and are crepuscular (i.e. active during sunrise and sunset) or nocturnal feeders when visibility is low.

Eastern cottontail breeding is dependent on warm temperatures, rather than time of year, and they have a short gestation time of 28 days.  The eastern cottontail female will build a nest for her kits by digging a shallow, slanted hole and lining it with fur from their underside.  Once the kits are born, the mother will carefully lay grass on top of the kits to serve as camouflage.  Nests are typically found in grassy areas close to shrubs or other herbaceous cover.  Kits are born blind.  The mother will spend most of the day foraging.  She only needs to come back to the nest twice a day to feed the kits.  Kits open their eyes around day 5, start moving out of the nest around day 14, are independent at 5 weeks, and are sexually mature at 2-3 months.  Females will rear 1 to 7 litters per year with an average of 5 kits per litter.  Eastern cottontails in captivity can live past 10 years; however, in the wild they rarely make it beyond 15 months, due to predation.

Special Notes:
Here in Bella Vista, you can sometimes find nests of kit cottontail rabbits built in hayfields or on undisturbed portions of your lawn or garden.  Eastern cottontails love to eat native vegetation and flowers.  Finding adults will require patience as their crepuscular activities along with their skittish nature make them difficult to observe.