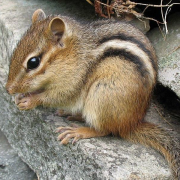 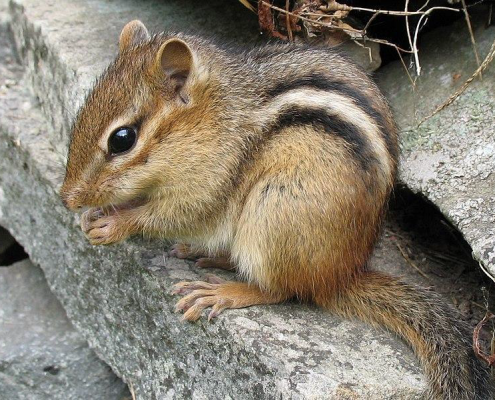 Identification:
The chipmunk is a small rodent with grayish to reddish brown fur and a distinguishing yellowish to reddish patch on its rump. They have stripes along their body, which distinguishes them from most other rodents. The chipmunk has five lengthwise dark brown to blackish stripes running from shoulders to rump, each with white fur down the middle. They have a furry tail, which is longer than the chipmunk’s body. They grow to around 12in in length, including the tail, and 2-5oz in weight. Eastern chipmunks have large cheek pouches located on either side of their mouth. 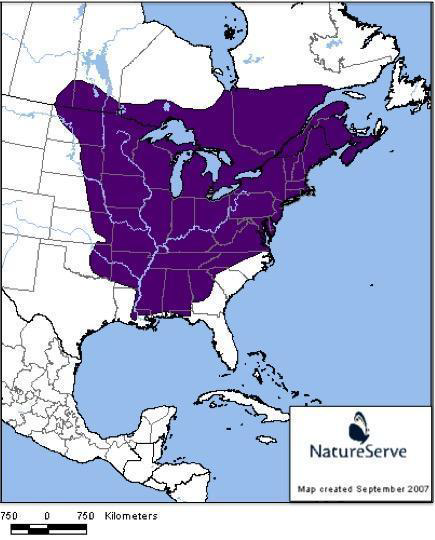 Range:
Tamias striatus is native to the eastern half of the U.S. and southeastern Canada. They can be found throughout the Ozarks and most of Arkansas.

Ecology:
Eastern chipmunks live in open deciduous wooded areas, edges of woodlands, and urbans areas. They prefer to live in rocky areas, areas with brush/log piles, or tickets of shrubs to use as refuge from predators. Chipmunks’ diet is primarily composed of nuts, acorns, bulbs, fruits, berries, seeds, and mushrooms. They also will eat insects, bird eggs, snails, and small immature mammals. Chipmunks build very elaborate underground burrows with multiple entrances. Chipmunks are highly defensive of their burrows and will camouflage them with leaves, sticks, and rocks.

Chipmunks are most active during the warm seasons of summer, spring, and fall. During the winter chipmunks do not fully hibernate but will undergo torpor, waking every couple of weeks to eat some of their food reserves. Chipmunks are adept climbers but mostly forage on the ground. Chipmunks spend most of their time actively foraging throughout the day but are most active in the mid-morning and mid-afternoon. Food is stored in a cache underground. Caches are marked with olfactory (scent) cues which can be more easily pilfered in moist environments. Therefore, the eastern chipmunks store food in larger caches that can be more easily defended. Sometimes chipmunks may forget about some caches which is beneficial since the seeds will produce plants and provide future food for the chipmunk.

Chipmunks are very solitary except during breeding season by which social interactions are relatively peaceful. Breeding usually occurs twice a year between April and May, and July and August. Females will mate with multiple partners and will stay close to their burrows. Males will widen their home range during mating season and can travel up to 170 meters (~550 feet) to find mates. During each breeding season, chipmunks have between four and five young. Gestation takes 35 days, and they are born blind and hairless. Females wean their young at about 4 weeks and make a new burrow to live in thereafter. Young chipmunks disperse from their burrow about 8 weeks after birth. Females live relatively close to their birth burrow, but males venture further away to set up their territory. Chipmunks reach sexual maturity at about 1 year of age and will live up to 3 years in the wild. They serve as a food source for hawks, owls, foxes, racoons, snakes, weasels, coyotes, bobcats, dogs, and cats.

Special Notes:
Here in Bella Vista, chipmunks can be a welcome guest in our yards. They especially like stone walls and may burrow under porches or walkways. These burrows do not typically cause structural damage and may be a good way to churn and aerate soil. They may also keep other pests at bay, such as insects and garden snails.