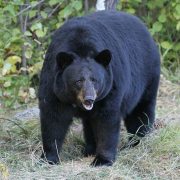 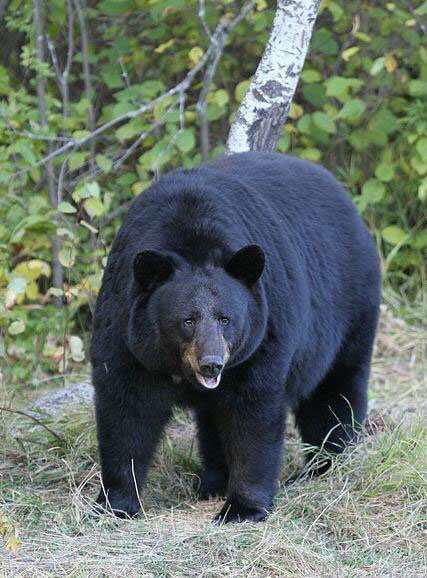 Identification:
The black bear is the most common and smallest species of bear in North America. Most black bears in this region are black in color. Some sub-species found in the northeast, northwest, and Alaska can be brown, cinnamon, and nearly white. Besides color and size, black bears can be distinguished from other bears by their broad skull with a narrow muzzle and small, rounded ears that are set back on its head.
Black bears have relatively large paws with their rear foot length ranging in size from 5.5 to 9 inches which is comparable to much larger polar or brown bears. Their paws are very dexterous, and they can open screw top jars and manipulate doors. Sows (female bears) tend to have a more slender point to their nose and are smaller, weighing around 30% less than males. Males tend to weigh between 130 to 650 pounds, while females weigh between 90-180 pounds. The largest wild black bear record was shot in New Brunswick in 1972 and weighed 1100 pounds!

Range:
Ursus americanus is native to most of North America with a historic range engulfing most of the continent. In the United States it can be found in most of the northern Midwest, northeast, Alaska, the Appalachians, Rocky Mountains, and in parts of southern Missouri and forested regions of Arkansas. There have also been reports of fragmented populations occurring in other regions throughout the United States. Of the bears native to North America, black bears are the most common and widespread. They are rapidly expanding their range in the southeast recolonizing their former range.

Ecology:
The black bears are generalist species with flexible eating, sleeping, and living preferences. Black bears are omnivorous which means it will eat a variety of foods including plants and meat. Black bears are strong climbers that use trees for food, predator evasion, and hibernation. They are most often found in mountains with dense forests with thick understories but can also be found in semi-urban areas near woods.

Black bears are elusive bears which tend to avoid contact with other bigger animals. Black bears have good eyesight and hearing, and a sense of smell that is seven times more sensitive than that of a domestic dog. Larger grizzly bears occupy more open forest habitats, so black bears prefer dense forests. Black bears are more active during the day when they share habitat with brown bears and more active at night when they live near humans. They have few natural predators with a few instances of being predated upon by big cats or brown bears.

Bears reach maturity at age 3 and achieve full size by age 5. Sows undergo a 2-year mating cycle. Mating occurs between May and July depending on the region. Black bears have a 235-day gestation period which includes delayed implantation of the eggs. Fertilized eggs do not implant into the uterine wall until November. This ensures that the cubs are born in late January or early February. Cubs are blind and less than 1 pound when born. They are heavily dependent on their mother for 30 weeks after birth. The average litter has 2 to 3 cubs, but a healthy female can have 4 or more. Cubs become independent between 16 to 18 months when the mother drives them away. She will mate again a few months later. The average lifespan of a black bear is 18 years with the oldest recorded wild black bear being 39 years old.

Special Notes:
Bella Vista has the habitat to support black bears, but they prefer to be further away from human development. Occasional sightings are usually young male bears attempting to establish a territory which have recently been driven away by their mother. For the most part, they are just passing through. As the population continues to increase, bear sightings will likely also increase. They do permanently inhabit the larger undeveloped tracts of land west of Bella Vista.