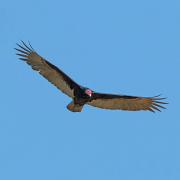 Identification:
The turkey vulture is the most widespread of the New World vultures. They are large, black birds with a wingspan of 63–72 inches, a length of 24–32 inches, and weight of 1.8-5.3 pounds. When soaring overhead, the wings have a two-toned gray and black appearance. Turkey vultures often hold their wings in a shallow “V” and rock from side to side when soaring. Adults have a featherless red head. Young birds have a blackish-gray head. Their feathers are brownish black. The flight feathers on the wings appear to be silvery gray on the underside, which contrasts with the darker wing linings, so they are easy to identify in flight. It also has a relatively short, hooked, ivory-colored beak. The irises of the eyes are gray-brown, and their legs and feet are pink-skinned. A turkey vulture’s feet are arranged with three toes forward and one back. The two front toes of the foot are long and have small webs at their bases. Overall a turkey vulture has flat feet that are not adapted for grasping. In flight, the tail is long and slim. The turkey vulture has very few vocalizations, but they can hiss or grunt when they are threatened or hungry, respectively. 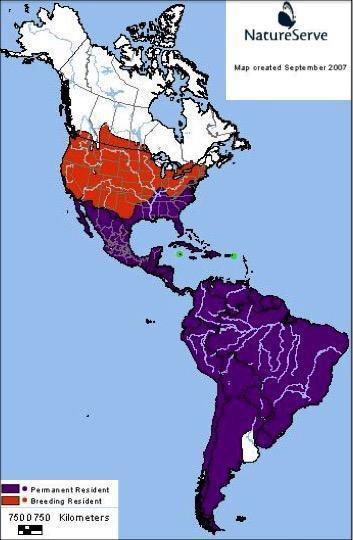 Range:
Cathartes aura is found from southern Canada to the southernmost tip of South America.

Ecology:
The turkey vulture is a scavenger and feeds mostly on dead animals. It finds its food using its sharp eyes and sense of smell, so when it is flying low enough, a vulture can detect the gasses produced by decaying animals. Turkey vultures can be found in a variety of habitats, such as pasture and grasslands, forests, shrublands, deserts, and wetlands. They prefer open areas with nearby woods for nesting, but they generally avoid heavily forested areas. They migrate to the southern United States and Central America for the winter.

Vultures are found in flocks and are community animals. They nest in caves, hollow trees, or thickets. They only use the caves for nesting during breeding season. Breeding season for vultures varies by latitude with southern latitudes breeding begins in March, while in more northern latitudes breeding starts later. Courtship rituals of the turkey vulture involve several individuals gathering in a circle, where they perform hopping movements around the perimeter of the circle with their wings partially spread. In the air, one bird closely follows another while flapping and diving. Each year a turkey vulture breeding pair usually raises two offspring. The eggs of a turkey vulture are cream-colored, with brown or lavender spots. Both parents incubate, and the young hatch after 30-40 days. Both adults feed the chicks by regurgitating food for them. The young leave the nest at about nine to ten weeks, but family groups stay together until fall.

Adults are almost exclusively carrion feeders, but there have been localized populations that have adapted to feed on newborn livestock, primarily lambs and calves. Vultures are likely attracted to the afterbirth and are opportunistic feeders of the helpless newborn.

There are very few natural predators to the turkey vulture. However, turkey vultures at any stage in life may be prey to great horned owls, red-tailed hawks, golden eagles, and bald eagles, while eggs and fledglings may be preyed on by raccoons and opossums. A turkey vultures primary form of defense is regurgitating semi-digested meat, which deters most creatures from raiding a vulture nest.

Special Notes:
Vultures are widely known as harbingers of death. Chinese tradition believes the vulture to be the only animal that can see both heaven and earth, so they are on omen for those who are about to die. Vultures are widely seen as a symbol for Halloween. On the contrary, some African cultures view vultures as messengers form the afterlife who bring joy to loved ones by delivering their souls back home. Some cultures even view vultures as a sign of rebirth.

Vultures have benefitted in more modern times from events held in their name. The Hinckley Buzzard Day event in Hinkley, Ohio marks the March return of vultures to northeast Ohio and the arrival of spring. Also, the small town of Makanda in southern Illinois hosts the annual Vulture Fest in October each year. Again, the symbolism of rebirth (spring) and death (autumn) is evident here. 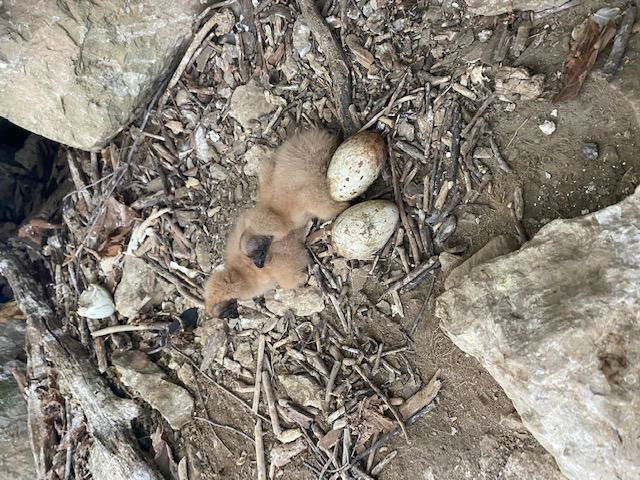 Here in Bella Vista, turkey vultures can be seen scavenging on roadkill and other carrion. Although scavenging may not give them a good reputation, it plays a valuable role in reducing disease in the ecosystem. In areas of the world, such as Asia, where scavenger populations are declining there is an associated increase in diseases like rabies and other harmful viruses. Be thankful turkey vultures can serve as a cleaning crew to our scenic roadways! However, over population of vultures can also cause problems. As a nuisance animal, they can tear up boat and vehicle upholstery and window linings and defecate on personal property. In the fall and winter, congregations of up to 400 individuals can be observed.