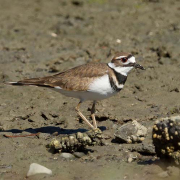 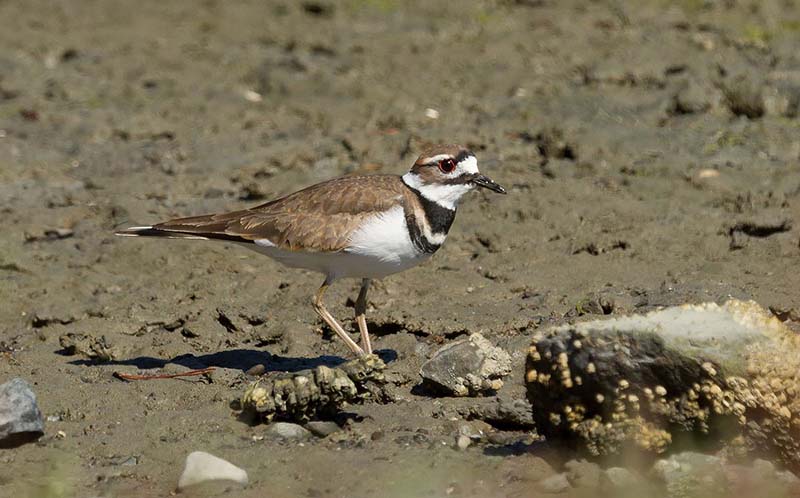 Identification:
The killdeer is North America’s best-known plover. Plovers are shorebirds, but killdeer are often found long distances from water. Adult killdeer are 8-11 inches in length, having a wingspan between 23-25 inches, weighing 2.5-4.3 oz. Coloration is brown with a rust-colored fringe on the top. They have a white stomach and throat with two black bands on their breast. The bright orange buff rump can only be seen in flight. Killdeer are quite vocal and make a distinct “kill-deer” call. The call is usually sharp and shrill. There are many online resources demonstrating this call. 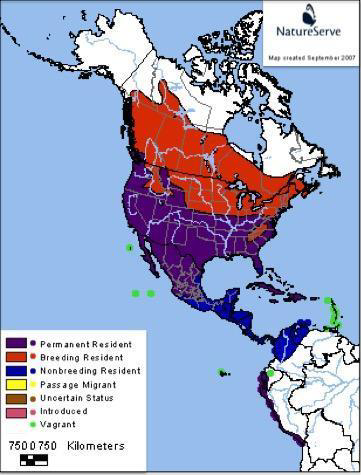 Range:
The killdeer is a medium distance migrant but is a year-round resident in most of North America. Northern populations avoid harsh winters by migrating south. In the central and southern United States as well as the Pacific coast, killdeer are year-round residents.

Ecology:
The killdeer primarily feeds on terrestrial invertebrates, such as worms, beetles, and grasshoppers, but they will feed on seeds and small vertebrates, as well. During the day, killdeer forage mainly in fields, especially those with short vegetation near water. Pastures are good places to find them. In the non-breeding season, when the moon is full or close to full, the killdeer will forage at night, because of the higher insect abundance at night during this time of year.

Throughout the U.S. and Canada, killdeer prefer open habitats such as fields, meadows, gravel bars, and mudflats, but they can be found in a variety of other habitats. Killdeer are often found in human-modified habitats such as gravel roads, driveways, parking lots, and lawns. They may even be found in upland areas far from water. While they do not require a special habitat for their daily activities, they do require specific nesting habitat.

Killdeer have a few mechanisms to escape predation. One iconic mechanism is their “broken-wing” display. When it spots a predator, the killdeer pretends it has a broken wing – calling loudly and limping along as it stretches out one wing and fans its tail. The intensity of the display varies throughout the breeding season. During egg-laying, the killdeer will usually just leave the nest. As incubation progresses, killdeer become more responsive. After hatching, killdeer will only make alarm calls.

Special Notes:
Here in Bella Vista, killdeer can be found in open fields, backyards, golf courses, and near the water’s edge. Killdeer don’t visit bird feeders, but if you look around your lawn or in gravel parking lots, you might see one. These birds are permanent residents here in Arkansas, so look out for them during breeding season, which is usually in spring. If you see the “injury display” you may be close to a nest. Be careful not to step on it as they are well camouflaged.