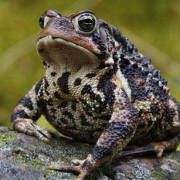 Identification:
The American and Fowler’s toads look very similar. Both toads typically have a gray or brown coloration and are 2-3.5 inches long. American toads are sexually dimorphic, which in this case means the males are smaller than the females and have darker throats during the breeding season. The Fowler’s toad has a light stripe down it’s back, but that can be hard to see. A great way to differentiate between the two toads is by counting the number of bumps inside the dark splotches on their bodies. American toads have one or two bumps per splotch, while Fowler’s toads have three or four bumps per splotch. Also, the belly of the Fowler’s toad is usually all white, unlike the American toad’s belly, which is white with black spots. Interestingly, these two species of toads can hybridize making it difficult to identify if they are in the same geographical range. 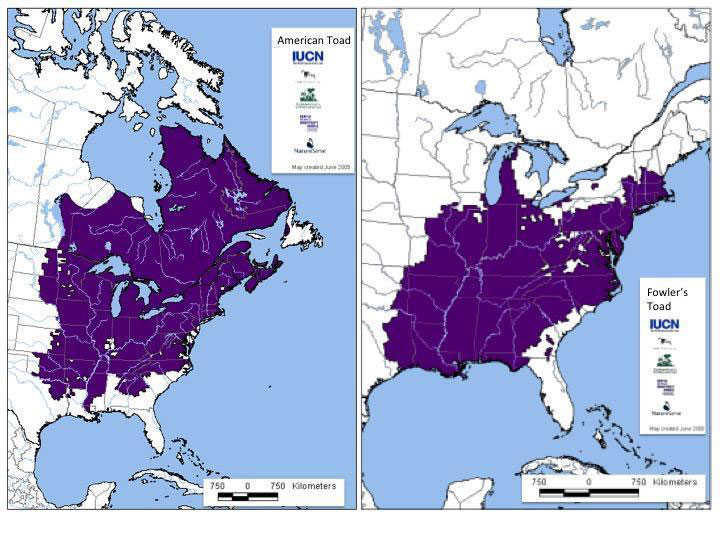 Range:
Bufo (Anaxyrus) americanus are one of the more widely distributed Bufo species in North America. Their range extends from Manitoba, parts of Ontario and Quebec, the Maritime Provinces, and southern Newfoundland in the north to Kansas and the Dakotas in the west. Their habitat stretches down across the southeastern United States, but the American toad’s range does not reach Florida. Bofu (Anaxyrus) fowleri is native to the eastern United States, but they are not found in the Coastal Plains of South Carolina, Georgia, or Florida.

Toads produce toxins to protect themselves against predators, but some predators have adapted to tolerate the chemicals in the toxin. Even in the egg and tadpole stage of development these species secrete a toxin to deter predators. American and Fowler’s toads will crouch and stay still to camouflage to avoid predation by those who have adapted to the toxin. The eastern hognose snake is tolerant and specializes in eating American toads.

Breeding in both species of toads usually begins in April, which is marked by a trill call of the male toad to attract a female. Females from both species choose their mate by the male’s call and the quality of breeding territory he possesses. After mating the female American toad lays 4,000-8,000 eggs in two rows, and each row spans from 20-66 feet long. The female Fowler’s toad can lay up to 12,000 eggs. Depending on the temperature, the development of Fowler’s toad tadpoles is a bit slower than that of the American toad if it is cold. Both species of toads reach maturity after two years. While longevity is not in the cards for most toads, some American toads can live to 10 years old, and there is a record of a captive American toad living for 36 years. Fowler’s toads do not fare as well in the wild, only living up to four years.

Special Notes:
Here in Bella Vista, both toads are found near our lakes and streams. Even if you cannot see them, you can identify the toads by their trilling calls. The Fowler’s toad has a short, buzzy, nasal trill that doesn’t last for more than four seconds, while the American toad has a similar trill that is less nasally and lasts from 5-30 seconds or more. It is also likely to have Fowler’s toads living around houses and gardens.