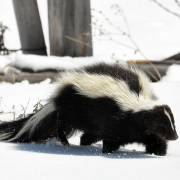 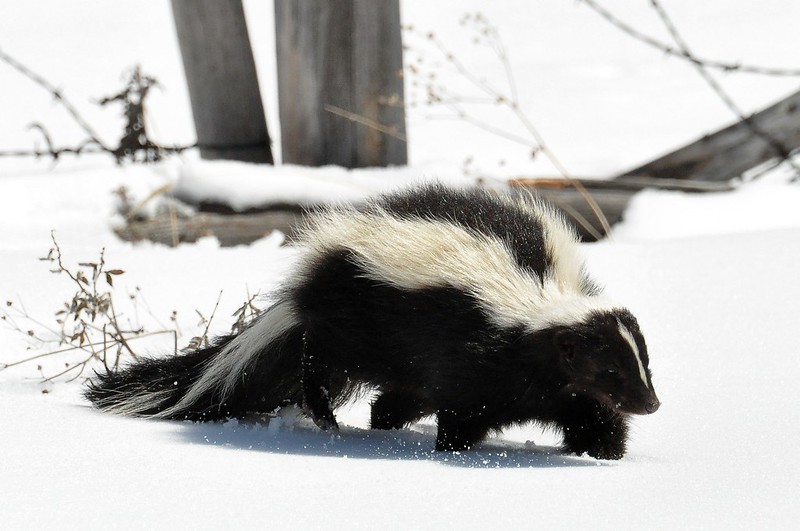 The striped skunk is a stout, short-limbed animal with a small, cone-shaped head and a long, furred tail.  They range between 20 and 30 inches long, and weigh 4.0 to 9.9 lb.  Their front feet are armed with five long, curved claws adapted for digging, while those on the hind feet are shorter and straighter.  The coloration can vary, but most have a black body with a white stripe extending from the head, which divides along the shoulders and continues as two stripes down the body to the tail. 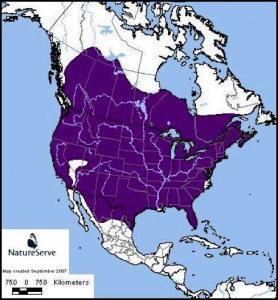 Stripes skunks are found throughout North America from southern Canada into northern Mexico.

The striped skunk is an omnivorous, opportunistic feeder.  Their diet is insectivorous during the spring and summer seasons when insects are abundant, then they switch to a carnivorous diet during colder months.  Throughout the winter, they eat small mammals, amphibians, fish, and ground-nesting birds.  The skunk is primarily nocturnal.  It sleeps in its burrow during the day and hunts at night.  The skunk doesn’t build its own den but finds abandoned burrows or natural hollows to make its den.

The striped skunk lives in a variety of habitats including pasture, mixed woods, brushland, and open prairie.  They are most likely to be found in areas where there is ample food and cover, like agricultural areas.  Though they prefer these open pastures and forests, they are never far from water.

Breeding season occurs from mid-February to mid-March.  The babies are born about two months later.  A female skunk has an average litter of about five to six babies, which are blind and deaf when born.  The babies are nursed in the den for about a month and a half.  They stay with the mother for a year before going out on their own.

While they might not be built for running away from predators, striped skunks have developed a defense system that is quite unique.  When a skunk is threatened, its first response is to run from a predator, and if that doesn’t work, it tries to frighten the predator by arching its back, raising its tail, and turning its back on the predator.  If none of these defense mechanisms deter a predator, the skunk will spray the animal with a strong-smelling fluid.

Here in Bella Vista, striped skunks can be found in open fields and forested areas, especially around dawn or dusk.  They can also be found in just about any open field or empty forested lot.  Be careful if you see one, because the skunk can spray a strong-smelling fluid up to 12 feet away!