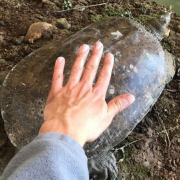 The spiny softshell is one of the largest freshwater turtle species in North America, with a carapace, or upper shell, length of 7-21 inches. Females are typically larger than males. Spiny softshells are easily distinguished from other turtles by their flat, leathery shell with very flexible edges. Their color ranges from a brown or yellow to olive, with males and hatchlings typically exhibiting a spotted pattern. Since they spend most of their time in the water, they have more webbing on their feet than most turtles, and each webbed foot has three claws. Another remarkable feature of softshell turtles is a snorkel-like nose they use to breathe while remaining submerged and possible buried in mud. A distinguishing characteristic between male and female spiny softshells is the number of spines on the front edge of their shells, behind their head. Adult males have many spines, while females only have a few. 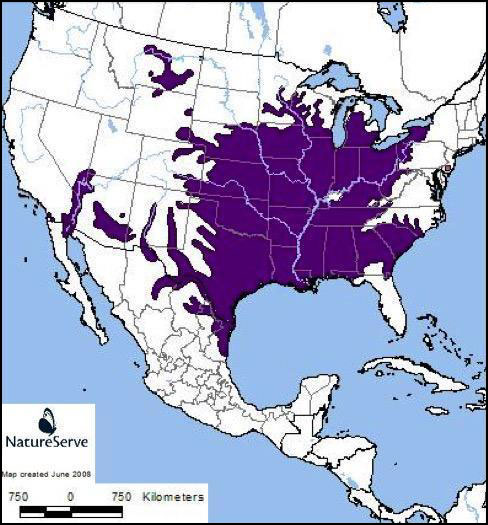 Apalone spinifera has a very wide range, and are found from South Carolina, west to Texas. Their range also extends north to Montana and east to New York.

The spiny softshell turtle is mostly carnivorous, eating anything it can fit in its mouth if it’s in the water, including fish, insects, and crayfish. However, they will eat algae and other plant material. They are benthic feeders, which means they can actively hunt their prey or bury down in the sand to ambush prey.

They can be found in nearly any body of fresh water including ponds, lakes, rivers, and streams. Sandy bottom areas are important for both their feeding strategy and nesting habitat. An interesting feature of these turtles is that they can, to a limited extent, breathe underwater. As such they prefer waters that are rich in oxygen. This is especially important during their hibernation period, as hibernating in oxygen poor waters could lead to death.

Spiny softshells don’t begin breeding until they reach 8-10 years old. Mating usually takes place in the middle or late spring in deep water. After a few months, the female will lay her eggs on a sunny sandbar or gravel bar near the water. Eggs hatch from July or September, but sometimes they will not hatch until the spring.

Due to their location, the eggs of spiny softshell turtles are often eaten by foxes, raccoons, and skunks.  Even though they are quick swimmers, juvenile spiny softshells are preyed upon by raccoons, herons, and large fish. The adult spiny softshell has few natural predators, and they are most often killed and eaten by humans. Spiny softshell turtles don’t have the same defense mechanisms a normal hard-shelled turtle has, because they cannot hide in their shell. If they are in the water, they will swim away and hide under the mud or sand to avoid predators. On land, their lack of a hard shell and general clumsiness is made up for by a change in attitude: they become aggressive if threatened. If bothered on land, spiny softshells will snap at their attacker, and their bite is quite painful. They will also kick with their powerful claws.

Here in Bella Vista, spiny softshell can be found around all the lakes and in Little Sugar. They can be friendly in the water, but do not try to go near them on land. Like most water turtles, they can be skittish, so your best bet for viewing is to keep an eye out for movement in the water or at basking spots at a comfortable distance.