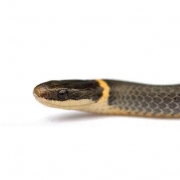 Identification:
Ring-necked snakes are easily identifiable by the white, yellow, red, or orangish band around the neck. Dorsal colorations are olive, brown, bluish gray, or smoky black. Sometimes the band around neck is broken and hard to distinguish. Ventral coloration is generally yellowish orange to red with crescent-shaped black spots on the margins. Ring necked snakes are very small, with adults averaging 10-15in long. Although they are slightly venomous, their docile temperament and rear-facing fangs mean they pose no threat to humans. They have a unique defense posture whereby they curl up, exposing their belly, and “play dead.”

Ecology:
Ring-necked snakes can be found in a variety of habitats, preferring areas with cover and denning locations. For example, they are often found under shrubs surrounded by leaf litter, under rocks, or under woody debris. Open woodlands, hillsides, and the edges of water bodies all make good habitat for ring-necked snakes. Any burrows they may make can be communally shared, and will be deep enough to protect from the heat of the summer and the freezing temperatures of winter.

They are carnivorous, with their diet primarily consisting of small salamanders, earthworms, and slugs while occasionally consuming small lizards, frogs, and juvenile snakes of other species. Prey are subdued with constriction and envenomation. They are active during the night or twilight hours, meaning they are nocturnal or crepuscular.

Special Notes:
Here in Bella Vista, ring-necked snakes are a common creature in gardens, especially those with leaf litter or mulch. They can also be found in the many wooded areas around Bella Vista, often under leaves, woody debris, or rocks. Although they are harmless, it is never suggested to handle wildlife. Best to leave them be so they can eat pest species like garden slugs!