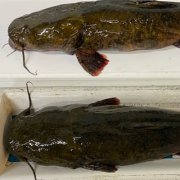 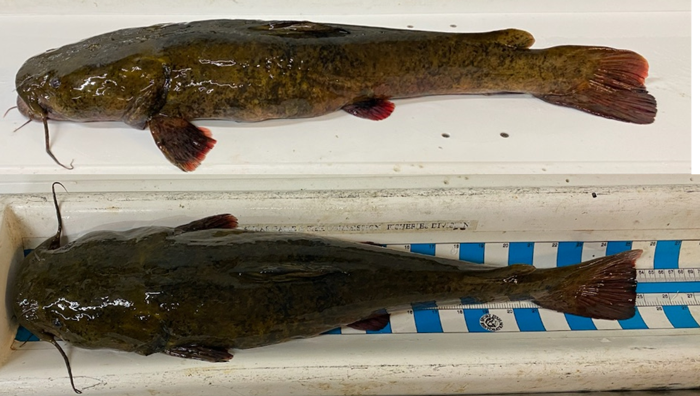 Identification:
The flathead catfish is the second largest North American catfish. Its skin is a mottled brown and black. They can be distinguished from other catfish by their wideset mouth and large, flat forehead. Unlike the blue and channel catfish, the flathead lacks a deep fork on its tail fin. Instead, its tail fin is more rounded. Due to its coloration and tail fin shape, it may also be mistaken for one of the several bullhead catfish; however, the bullhead catfish lack a flat forehead. They are also relatively long lived, with a lifespan of up to 24 years. Flathead catfish have fleshy protrusions called barbles along their mouth, as well as spines located in the dorsal fin and both pectoral fins on their sides. Like all catfish, the flathead catfish has an adipose fin, which is a small fleshy projection on their back, just in front of their caudal or tail fin. They can grow up to 69 in. in length and weight up to 140 lbs. 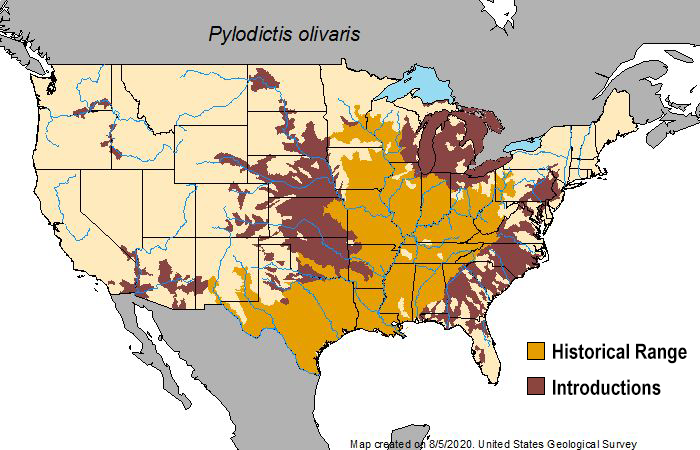 Range:
Pylodictis olivaris is native to North America from the lower Great Lakes to Mexico. It has also been introduced to other river systems. They can have devastating impacts to native fishes when introduced outside of their natural range.

Ecology:
The flathead catfish is a voracious carnivore. It prefers live prey and will feed on almost anything that moves, including fish, insects, and crayfish.

Sexual maturity is reached within 3-5 years, typically. Breeding occurs in late June and early July. Nests are usually made in and around submerged logs, ledges, and debris. Males build the nests and defend the eggs. Males will also fan the eggs to provide fresh water and oxygen. Clutch size depends on the size of the female, with about 1200 eggs laid per pound of the female. Juvenile flathead are also very cannibalistic making them a bad choice as an aquaculture species.

The flathead catfish is said to have the best tasting flesh of the catfishes of North America. Filet quality and the size of the fish make the flathead catfish popular among anglers. This has led to an introduction to non-native waters in other parts of North America, such as waters in southern Canada and in the waters of the eastern slope of the Appalachian Mountains to the Atlantic Ocean. The highly voracious nature of the flathead means that local fish populations can rapidly decline in the presence of introduced flatheads.

Special Notes:
Here in Bella Vista, flathead catfish are not stocked in any of our lakes nor are there established populations. Their aggressive predation may have negative impacts on the fish populations of Bella Vista lakes. However, we have recently captured a flathead on Lake Ann, most likely released by an angler from Beaver Lake who did not want the fish. Lake Ann is a popular spot for Beaver Lake anglers to stop and clean their catch, which can lead to some live fish being deposited into the lake. According to Arkansas Game and Fish regulations, it is illegal to release any fish into waters other than where it was caught. This regulation not only prevents the spread of fish species into waters in which they don’t belong, but also prevents the spread of fish parasites and other aquatic born pests, like invasive aquatic vegetation. If you have any questions or information about flathead catfish in any Bella Vista lake, please call the Lakes and Parks office, 479-855-5068.