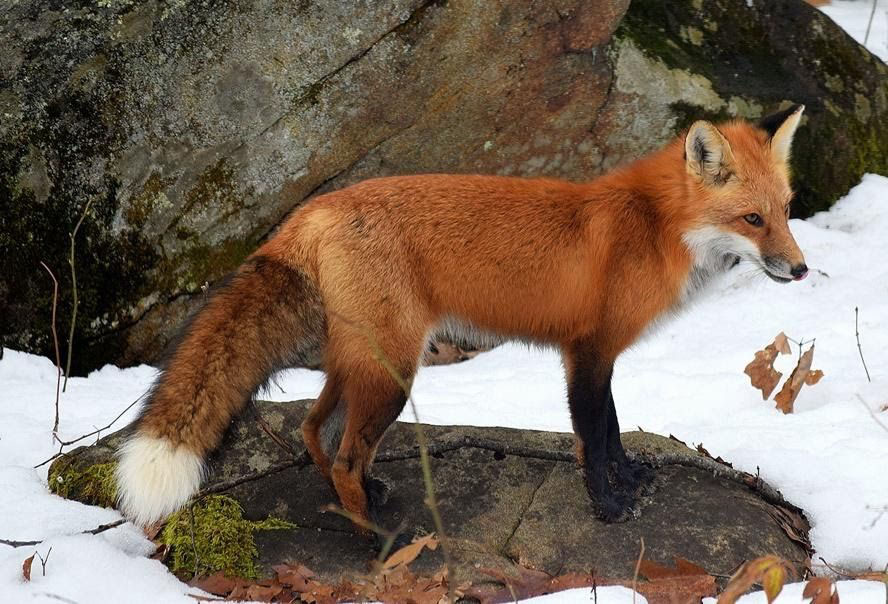 Identification:
Red foxes get their name from their striking red fur. Red and grey foxes often get mistaken for one another due to the overlap in habitat and patches of red and grey fur in both. Red foxes have white tipped tails, while grey foxes usually have black tipped tails. Grey foxes also tend to be grey and black in overall color. Red foxes are also generally larger in size than grey foxes. Adults average 14-20 in high at the shoulder, 18-35 in long, not including tails, and weigh 5-31 lbs.

Range:
Red foxes are widespread across the northern hemisphere, including Eurasia and North America. They originated in Eurasia and migrated to North America in two waves. The first wave was around 400,000 years ago and the second around 10,000 years ago. This has led to controversy as to whether the North American red fox should be classified as a separate species. Red foxes have also been introduced to Australia, where they are considered an ecologically devastating invasive species.

Before 1700 Northwest Arkansas represented the eastern boarder of the coyote’s range. The decline of the red wolf population and agricultural practices which creates more open habitat has allowed the coyote to expand its range to the east coast. As a result, red fox populations have experienced local declines.

Ecology:
Red foxes are highly adaptable and can inhabit forests, wetlands, grasslands, and suburban areas. They are known for being smart and cunning, making them great scavengers. Red foxes are relatively common in urban areas close to wooded areas and fields. This allows them access to natural foods, as well as human waste products and trash.

The lifespan of the red fox ranges from 2-5 years in the wild, but they can live up to 15-20 years in captivity. Mating occurs during the winter, with kits being born in the spring. The average litter size is six kits, but litters can be as large as 13 kits. Red foxes are thought to be largely monogamous. Red foxes are highly social, and may live in large shared family territories, with relatives caring for the dominant female’s kits. After a year or two, young foxes may move away from the family group if there is a good chance of gaining their own territory.

Red Foxes are omnivores with a variable diet. They will scavenge or prey on a variety of animals including small mammals, insects, reptiles, and fish. They will also readily consume various fruits, seeds, tubers, and grasses. Human garbage is also scavenged by red foxes in urban areas.

Special Notes:
Here in Bella Vista, foxes can be seen near any of the many wooded areas, especially around dawn and dusk. They can also be seen crossing the golf courses at these times. Bella Vista is a haven for the red fox. Varied habitat offered in neighborhoods, undeveloped wooded property, and power line right of ways offers perfect hunting and scavenging grounds for foxes. Although coyotes are present in our city, they are more wary and stay further away which offers foxes some protection.

Mange appears to be a chronic problem with the local fox population. Mange is the result of mites that can be transferred through social interactions and is often transferred to kits in the den. Foxes can carry most diseases common in dogs such as distemper, rabies, and parvo. Residents should limit pet interactions with foxes by feeding pets indoors.