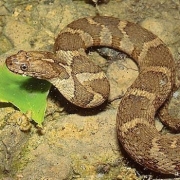 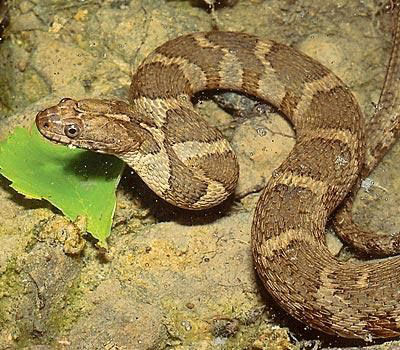 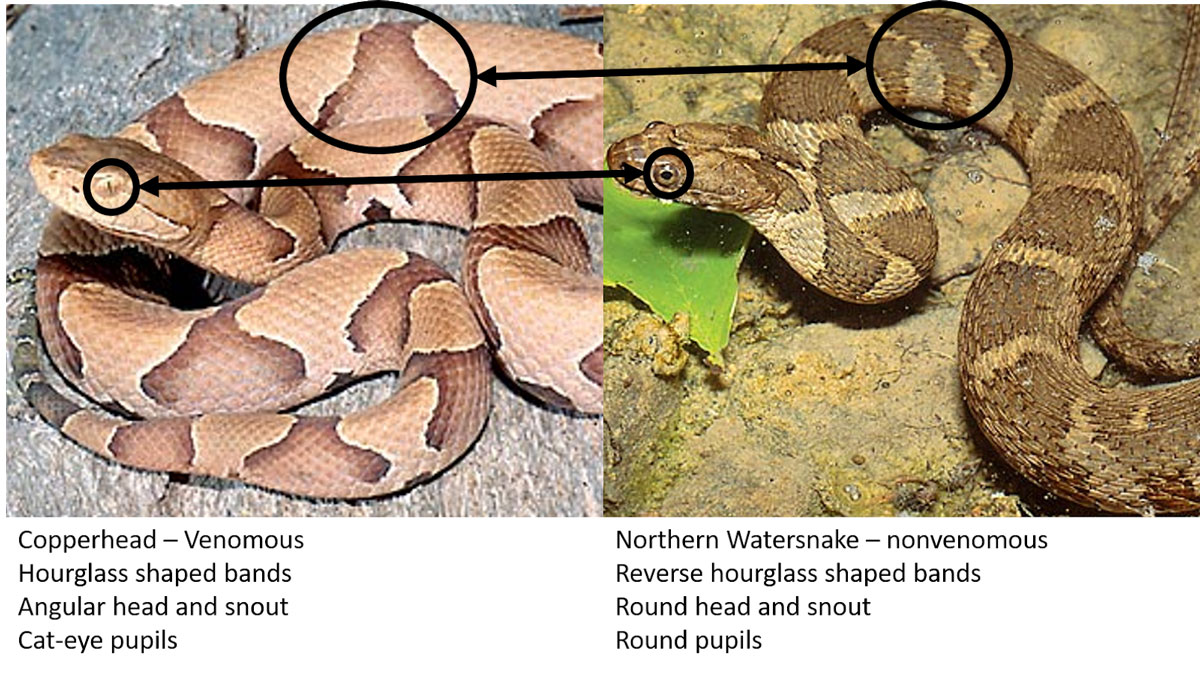 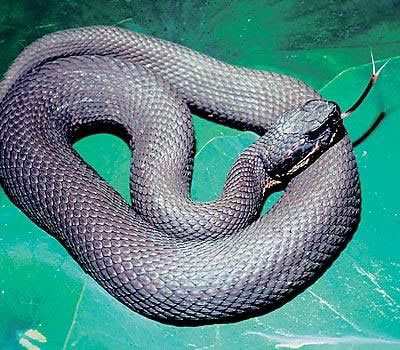 Northern watersnakes are common nonvenomous snakes. They can frequently be seen basking on rocks near the water’s edge. Northern watersnakes are typically tan to light brown in color with dark brown to black banded spots; however, they can also appear nearly black. The typical coloration along with the banding pattern often leads to these snakes being confused for copperheads. Despite their similarity, the two snakes can be distinguished easily. Whereas the copperhead has hourglass shaped bands on its body, the watersnake has a reverse hourglass shape, with the large part of the mark over the center of the back. The copperhead head and snout are angular with sharp features, while the watersnake head and snout are round and smooth. Copperheads also have distinct slitted pupils, while watersnakes have large round pupils. The coloration also differs in vibrancy. The copperhead is always a metallic copper color, while the watersnake is much more drab and browner in color. Finally, these two snakes live in different habitats, with copperheads generally living in the forest under logs, while watersnakes live in burrows on the banks of waterbodies. Unfortunately, because of where the watersnake lives and because some individuals have an almost black color, they are often mistaken for yet another venomous snake, the cottonmouth. The cottonmouth, like the copperhead, has an angular head with sharp features, as well as slitted pupils. The cottonmouth is generally a much larger bodied snake than the watersnake and has different color patterns, but often is so dark in color that patterns are hard to distinguish. Northern watersnakes can grow to 4-5ft long with females weighing 5-14oz.; males are somewhat smaller. 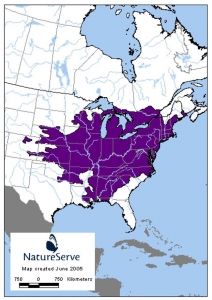 The Northern Watersnake (Nerodia sipedon) can be found throughout much of eastern and central North America. It was also introduced to California and is now considered an invasive species due to possible competition with the native giant garter snake.

Active during the day and night, the northern watersnake spends much of its time basking near the edges of waterbodies. They can live near any freshwater source that supports enough food. They use their keen smell and sight to hunt for fish, frogs, worms, leeches, crayfish, salamanders, small birds, and small mammals. Natural predators of northern watersnakes include foxes, coyotes, racoons, opossums, birds of prey, and snapping turtles. Juveniles are typically more in danger of predation then are adults.

Northern watersnakes are ovoviviparous (live bearing) and mate from April to June. The females carry the eggs inside their bodies and can birth up to thirty young at a time, averaging eight. Young are typically 7-9 inches upon birth. Young are born between August and October and there is no parental care. It takes northern watersnakes on average four years to reach sexual maturity.

Here in Bella Vista, northern watersnakes can be observed near our lakes and golf course ponds, as well as around the various streams and creeks. They are easily spooked and will dive into and under the water at the slightest provocation. Although generally perceptive, a basking watersnake is relatively easy to sneak up on as they bask in the sun along the water’s edge. People and snakes are often startled because the snake doesn’t move until the person gets close. Remember, the snake would rather get away then try to fight. Although they are nonvenomous, if cornered, they will strike furiously to intimidate their attacker long enough to escape. While doing so, they often emit a foul-smelling musk. Many people fear snakes; however, they provide a valuable ecosystem service in the form of pest control, while also being generally harmless to humans. If you have any questions about snakes or need a snake identified, don’t hesitate to call the Lakes and Parks Department for assistance (479-855-5060).