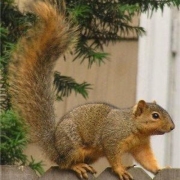 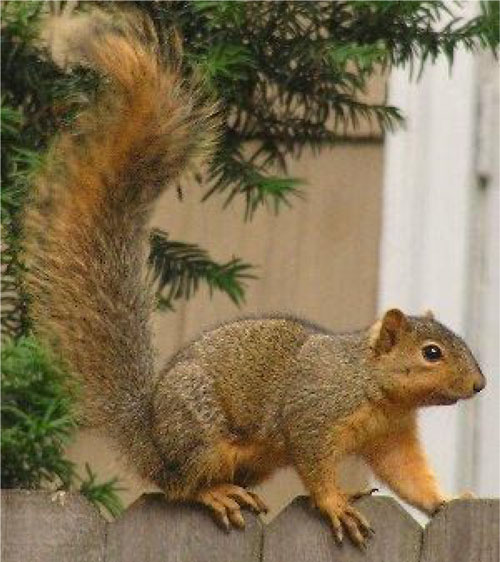 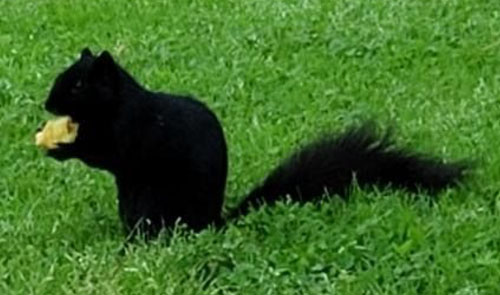 The fox squirrel is the largest tree squirrel native to North America. It reaches lengths of 8 to 13 in, weighing 1 to 2 lbs. Both males and females look alike, exhibiting no sexual dimorphism in size or coloration. The fox squirrel’s fur is greyish light brown with a brownish orange on the underside. In some populations, fox squirrels have dark brown markings or various patterns of black fur. Fox squirrels have long claws and are natural climbers. They can be differentiated from the eastern grey squirrel by both size and color, with grey squirrels having grey fur with a white underside and being about half the size of fox squirrels. 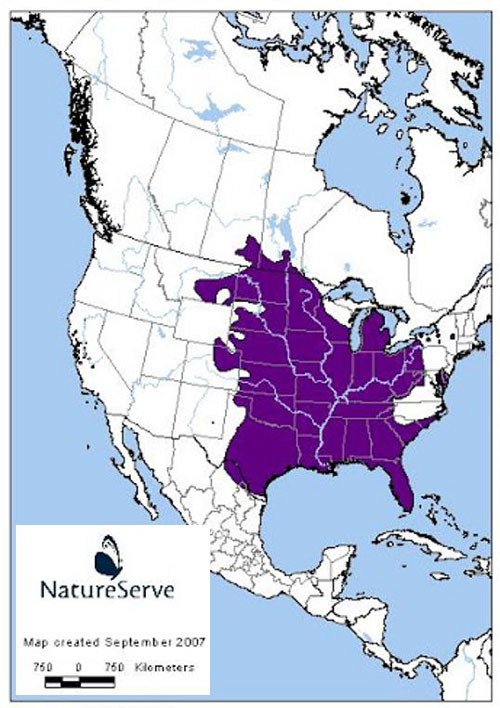 Sciurus niger is native to eastern and central North America and introduced to western regions of Canada and USA. For example, while there are naturally occurring populations in Colorado, many populations are because of introductions in the early 1900’s. Fox squirrel populations expanded naturally across Colorado by riparian corridors, invading urban areas.

Fox squirrels can occupy any sizable forested area. They tend to be the dominant squirrel species in smaller patches of wooded land and open park like habitats. Larger populations can be found in areas where nuts can be foraged from oaks (Quercus), hickories (Carya), walnuts (Juglans), and pines (Pinus). While their diet consists mostly of nuts and other available fruits, they will also readily consume insects, bulbs, tubers, roots, and tree buds. They have strong jaws that allow them to crack nuts and other hard forage.

Fox squirrels can mate anytime during the year, but estrus occurs in December and again in June. During this time males compete for mating rights. Females often mate with several males. Females become mature at 10 months and can have their first litter at one year. Gestation is about 45 days, and two litters can be had per year. Litter size is generally 2-3 offspring. Reproduction rates can be correlated with food and resource availability. Development in fox squirrels is slower compared to other rodents. Fox squirrels are born blind, with their eyes opening around 5-6 weeks old. Offspring are weaned around 8-10 weeks. Fox squirrels can live up to 18 years in captivity, but in the wild more commonly live to 8-12 years.

Very few natural predators can catch an adult fox squirrel. Most predation is opportunistic by large predators, such as bobcats, coyotes, wolves, and large birds of prey. Juveniles can be easily captured however, and face additional predation from raccoons, opossums, and snakes.

Here, in Bella Vista fox squirrels can be found anywhere. A notable population lives on the Berksdale golf course. This population is unique because it has a high proportion of individuals with dark fur patterns. The photo above was taken of one of the completely black individuals. The abundance of nut producing trees here, such as oak, hickory, and walnut, make Bella Vista a prime fox squirrel habitat.