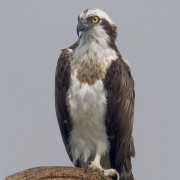 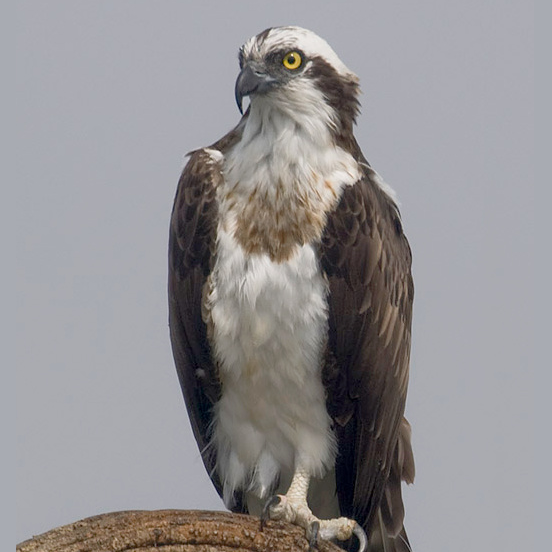 The osprey Pandion haliaetus is a large predatory bird. Males and females are similar in appearance, although males can be distinguished by narrower wings and body compared to the female. The underside is white, and the back and wings are a dark brown. Their head is white with dark brown surrounding their golden eyes extending to the back of the neck. They have a black, sharply downturned beak and white feet with sharp, black talons. They have distinctive wings with four long feathers; the fifth feather is shorter. Their tail is short and has both brown and white coloration. Adults average 20-26 inches long, weight 2-4.6 lbs., and have a wingspan of 50-71 inches. 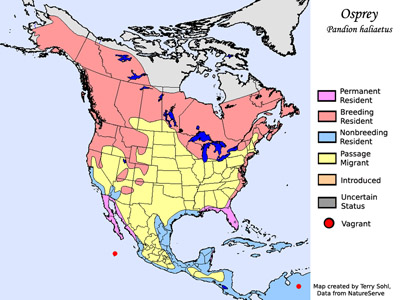 The osprey is found almost worldwide. It is very adaptable, able to live almost anywhere it can find fish to feed on and can be found on every continent except Antarctica. Florida and the Gulf Coast tends to have permanent residents who do not migrate.

Osprey can inhabit both freshwater and saltwater environments. They are very adaptable and are often seen on coastlines, or by large rivers and lakes. Virtually anywhere that has fish can by inhabited by osprey. The osprey has many adaptations that help it capture fish including reversible toes, sharp spines underneath the toes, a membrane to close the nose when diving, backwards scales on the talons that hold prey when flying, and dense, oily feathers that will not hold water when they dive. Fish ranging from 1.8 oz to 4.4 lbs. can be captured by osprey. Although their diet is 99% fish, they also consume rodents, rabbits, amphibians, other birds, and small reptiles.

During breeding, osprey build large mounds of sticks, brush, or vegetation that they use as nests. They are monogamous, breeding with the same partner for life. Both parents help raise young. Females lay 2-4 white eggs with dark brown spots. Eggs hatch within a month. Eggs weigh around 2.3 oz and depend on the large nest, and their mother, for warmth. Young will get their flight feathers in 8-10 weeks after hatching.

Osprey commonly live 7-10 years, and rarely survive for 20-25 years. Great horned owls, golden eagles, and bald eagle are all predators of ospreys. These predators’ prey on eggs as well as adults. Eagles most often harass ospreys and take freshly killed prey from them. Raccoons are another predator, killing young or eggs if they can reach their nest.

Here in Bella Vista, osprey can most likely be spotted flying near the lakes or Little Sugar Creek in search of prey. In Arkansas, they are not permanent or breeding residents, so breeding behavior cannot be observed.