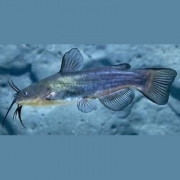 There are seven species of bullhead catfishes, all native to North America and all within the genus Ameiurus. There are two common species of bullheads in Northwest Arkansas, the black and yellow.  The black bullhead Ameiurus melas has dark whiskers, called barbles, under its chin that are either gray or black and which differ from the white ones of the yellow bullhead Ameiurus natalis. Both black and yellow bullheads are solid brownish-yellow fading to white on their bellies. All bullhead catfishes have a quadrate, unforked tail fin which distinguishes them from other catfish species. They also have spines in the dorsal fin on their backs and both pectoral fins on their sides. Like all catfish, the bullheads have an adipose fin, a small fleshy projection on their back just in front of their tail fin. Bullheads are commonly 12-16 inches and weigh 1-2 lbs. 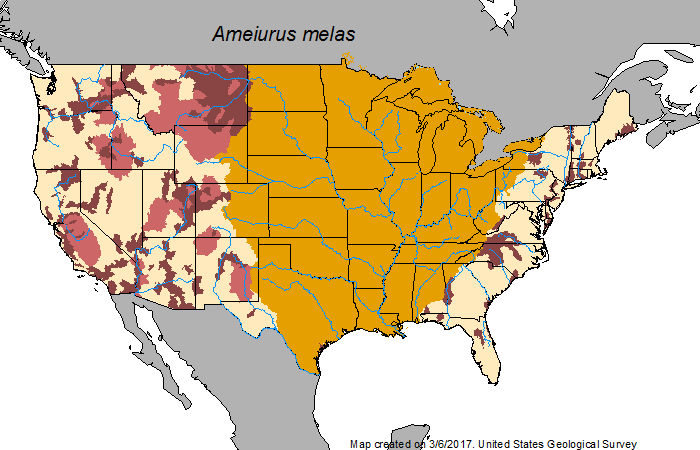 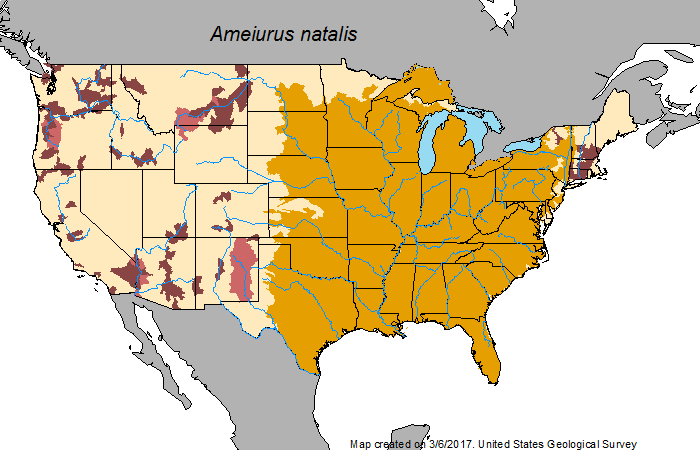 Bullheads are warm water fish, preferring water temperatures around 75-85°F. They are considered “rough fish” as opposed to “game fish” in part because they are seldom sought after and few regulations govern their harvest. The meat is of good quality especially when caught from clean waters and has even been described as having a sweet flavor. Small size is typically the reason more bullheads are not harvested.

Bullheads are generally not stocked intentionally. They tend to overpopulate in small impoundments.  Their feeding activity can create muddy conditions impact water quality. Bullheads are very tolerant of these conditions, but many gamefish are not. There have been accidental stockings by misidentifying them with other catfish species. This has resulted in established populations well outside of their native ranges.

Spawning in Arkansas occurs from May-June when temperatures range from 66-75°F. Females primarily make oval shaped nests in shallower water, although occasionally males will help construct nests. Both parents guard the nest until young hatch. Young then school with the parents until they are around 1 inch long when the parents abandon them. Bullheads are thought to be monogamous.

Bullheads are bottom feeders and consume almost anything, including fish, insects, crayfish, and dead organisms. Like other catfish, they rely on their olfactory senses to find food instead of their eyesight, which is performed using their mouth barbles. Yellow bullheads are the pickiest out of the two species.  All bullheads primarily feed at night.

Here in Bella Vista, bullheads are not stocked deliberately in any of the lakes. They are commonly found in golf course ponds due to periodic inundation by Little Sugar Creek which maintains good populations of both species. Populations in our lakes remain low due to predation by game fish, primarily largemouth bass. It is probable that they are found in all our lakes, as they were a native stream fish before the valleys were flooded.