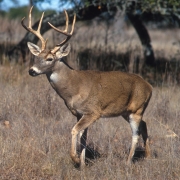 Identification:
White-tailed deer, Odocoileus virginianus, are most recognizable by the bold, white underside of their tails, which stands up straight when alarmed. In the summer adult deer have a thin reddish coat but is replaced with a thick brown coat around September. They have white on their undersides, insides of their ears, and beginning of their necks. Their ears are lined with darker fur, and there is white around their noses and mouths. Their hooves are separated into two parts with a split down the middle. Males, or bucks, have antlers that are shed and re-grown each year. Females are known as does, and young as fawns. Fawns are characterized by the white spots all over their body which they lose by 6 months of age. Bucks average 100 lbs., with does around 88 lbs., but weights are highly variable. In the northern parts of their range, deer are bigger in size. 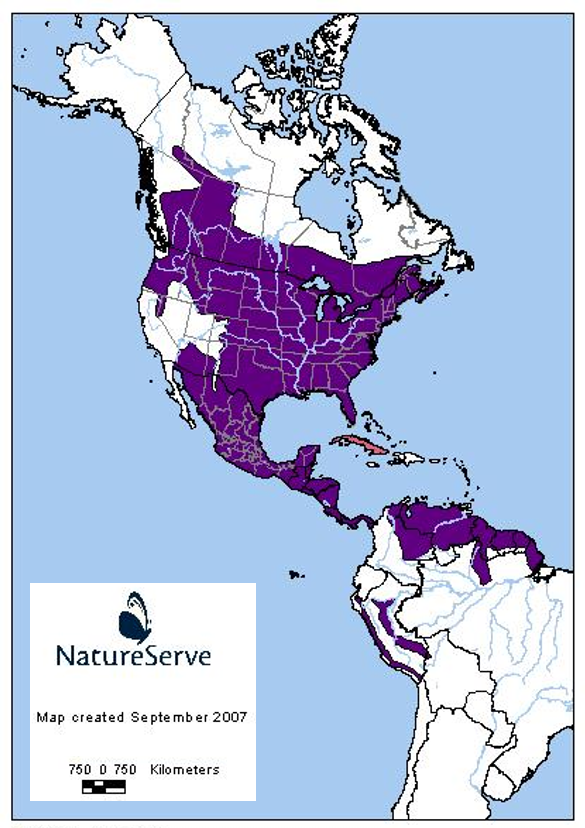 Range:
Odocoileus virginianus is native to the United States, with a range including southern Canada down to northern South America. They have been introduced to other parts of the world such as Puerto Rico, New Zealand, and Cuba.

Ecology:
White-tailed deer prefer habitats with forest edges and open woodlands. They also like areas with dense vegetation for protection from predators. White-tailed deer are herbivores, consuming plants, grasses, fruits, acorns, clover, and corn. Deer can be considered a nuisance to farmers who grow corn or fruits that the deer will feed on and cause damage. In places with large populations of deer, they can have major impacts on native plants, although their browsing can help plant diversity in some areas. A deer’s home range usually consists of around one square mile, but this area is not in any defined shape, rather it is based on habitat, terrain, and home ranges of dominant deer. Deer can jump high fences and have a propensity to be a hazard on roadways.

Deer have many different calls they use to communicate with each other. Fawns will squeal, called bleat, if they have been separated from their mothers which will deepen as it matures. Adult deer grunt to each other to get attention, or a mother will grunt to find her fawn. When they feel threatened, deer will snort or blow to signal danger to other deer in the area and will raise their white tail while running away.

White-tailed deer in Arkansas breed from October through December with the peak usually occurring in mid-November. Breeding season is known as the rut. Males will breed with as many females as they can. Bucks will scrape an area with their hooves, clearing some ground and rub their antlers on the bark of a small tree to let females know that a male is in the area. They will urinate in these areas to leave their scent. Males may also fight with their antlers and hooves during territory or breeding disputes. Females release hormones and pheromones when they are in heat, letting bucks know they can breed. Females are pregnant for 6.5-7 months before giving birth. Females will nurse the fawns and hide them in dense vegetation for around 4 weeks to keep them hidden from predators. After that, fawns can get up and follow their mothers to search for food. Male fawns normally leave their mothers after a year, while females tend to stay longer.

Chronic wasting disease (CWD), a fatal neurological disease with no cure, has been found in some deer in Arkansas. It is caused by a protein in the brain that is abnormally shaped, called a prion. This disease can spread from direct contact between animals, or through contaminated plants. This disease causes deer to slowly waste away and become very sick. Humans are not at risk of getting CWD, although it is suggested that you should not eat a deer that has the symptoms of CWD. Also, there are some tick-borne diseases that deer are an intermediate host for, such as Lyme disease and Rocky Mountain spotted fever, which can be transmitted to humans.

Deer are popular among hunters for their meat, called venison, and for the antlers of bucks. Bucks will grow their first set of antlers when they are a year-old during spring and summer. Antlers are pure bone, although when first starting to grow, they are covered with blood vessels, nerves, and a soft layer called velvet. Growth can continue until September when the deer will start to rub off the velvet layer on trees or anything hard. Once the velvet falls off, the hard bone is left. Their antlers are shed around January-February.

Special Notes:
Here in Bella Vista, white-tailed deer can be seen virtually anywhere at any time. They are most active at dawn and dusk. Be careful of deer by roadways as they often run out in front of traffic. The second or third deer is often determined to follow the leader and often collisions with cars come from “the followers”.