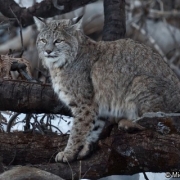 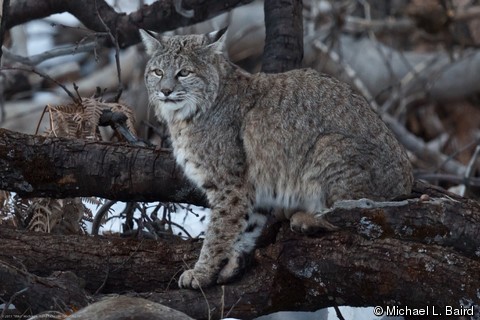 Bobcats Lynx rufus are small to medium sized predatory cat’s native to North America. They have tan-brown fur with black streaks and spots scattered on their body with white around their mouths and belly. Their pointed ears are tipped with black fur. Fur sticks out around their face, making their head look wide. Their eyes are yellowish with a black pupil. They have large paws with retractable claws and long legs and their black tipped tail is short and stubby.  Adults are 19-49 inches long from head to tail and 12-24 inches tall. Bobcats weigh 14-40 lbs. with females weighing slightly less. 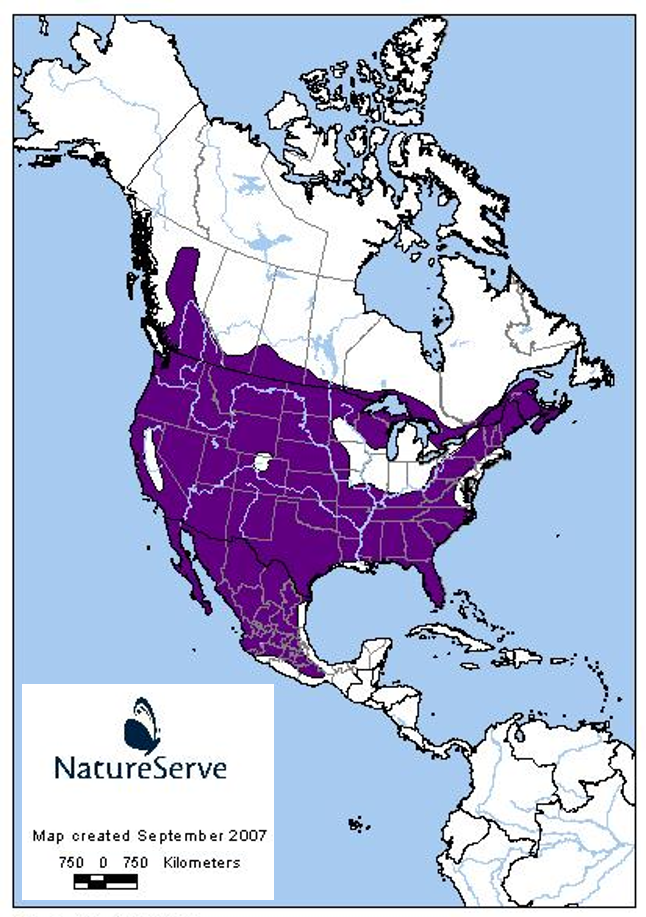 Lynx rufus is native to North America including most of Mexico, the United States, and southern Canada.

Bobcats are found in many different types of habitats, including all of Arkansas. They prefer woodlands but are also found in swamps, deserts, and rugged mountain areas. Bobcats can adapt given food and suitable habitat. Bobcats are solitary and occupy home ranges from 0.25 to 25 square miles. Females do not roam as far as males and do not associate with other females. Males are not normally tolerant of other males; however, their home ranges may overlap with other males and females. Territory is marked by urine, feces, and claw marks on trees. Bobcats are crepuscular, meaning they are primarily active several hours after dawn and before dusk. Behavior can change somewhat with the prey they are pursuing.

Bobcats normally have several dens for shelter in their home ranges. Predators of adult bobcats include humans, cougars, gray wolves, and coyotes. Kittens have more predators, including owls, eagles, hawks, foxes, and other adult male bobcats. Juveniles have high mortality rates in the few months after leaving their mothers. Diseases and starvation are other threats to the survival of bobcats. Bobcats are susceptible to parasites, both externally and internally. They carry ticks, fleas, and parasites of their prey. One mite, Lynxacarus morlani, is only found on the bobcat. These parasites are common on bobcats and are a threat to their survival, potentially causing more deaths than starvation and predation.

Bobcats consume birds, fish, insects, rodents, and other small mammals. They are a known predator of many domesticated animals including small dogs, cats, sheep, and goats. They often employ a crouch and pounce hunting technique for small prey much like a house cat hunting a mouse. With larger prey, they will stalk and rush the animal when they get inside 30 feet. With smaller prey, the bobcat will lie, crouch, or stand and wait for prey to come close before they pounce on it. Bobcats can survive long periods without food but gorge themselves when prey is readily available.

Breeding first occurs when bobcats are 2 years old. Dominant males stay with a female, mating with her several times from winter until early spring. Courtship may involve bumping, chasing, ambushing, and loud screams and hisses. Males and females generally mate with more than one partner. Normally 2-3 kittens are born after a gestation period of 60-70 days. Females raise the young on their own and they are weaned at around 2 months. At 3-5 months they can travel with their mother and hunt on their own within their first year. After they are able to hunt alone, they normally separate.

Here in Bella Vista, bobcats could be spotted although they are mostly solitary. If spotted it would most likely be in secluded, wooded areas. Bobcats generally stay away from busy areas and commotion. Large cats may be mistaken for a bobcat, but they can be distinguished by the pointed ears, short tail, and generally more ornate color patterns compared to house cats. Bobcats themselves may be confused for a mountain lion; however, they are much smaller and lack the characteristic long tail of a mountain lion.