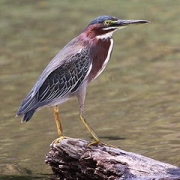 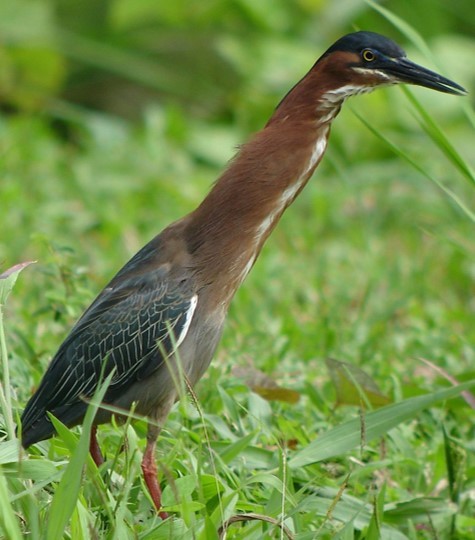 Green herons Butorides virescens are relatively small birds which can get up to 14 inches tall and have a wingspan of 25 inches.  Females are slightly smaller than males and their plumage is duller in the breeding season.  Adults have yellow legs and a long, dark, sharp beak.  The top of their head is blackish green and they have blue-gray on their back and wings that fades to green.  Their neck is brown with a white stripe down its length and a white chin.  Juveniles have reddish-brown and white streaks down their head and neck and many white spots on their wings.  Hatchlings have gray down feathers all over except white on their stomachs.  Adults have long necks but keep it pulled in close to their body at rest or while flying.

The green heron is native to northern South America, Mexico, and the United States.  They migrate north in late winter and early spring then head south August-October.

Green herons inhabit wetlands and other water bodies including wooded ponds, lakes, marshes, and rivers.  They make nests in trees or vegetation by water.  Nests are made of sticks several meters off the ground.  They are monogamous for a breeding season, with the male picking the nesting site and displaying courtship by flying noisily in front of a female with his head and neck feathers puffed out.  Green herons rarely congregate while nesting.  Females lay 2-6 pale green eggs in 2-day intervals.  Both parents incubate eggs until they hatch, normally around 21 days.  Both parents also feed the young and slowly wean them as the young get their flight feathers.  Young can usually fend for themselves when they are a little over a month old.  Occasionally green herons will breed twice a year.

Green herons consume fish, aquatic invertebrates, amphibians, crustaceans, spiders, reptiles, and small rodents.  They feed by stalking prey on the shoreline or from perched on branches above.  They are mainly active during dusk and dawn, hiding during the day unless searching for food.  They sometimes use “bait” to catch fish by dropping food or insects on the water’s surface to attract fish.  When the fish come for the bait, the heron will grab it.

Here in Bella Vista, green herons can be spotted during their summer breeding season, mainly near the lakes or streams.  They are humorous to watch, especially when they sporadically extend and retract their long neck.