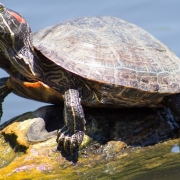 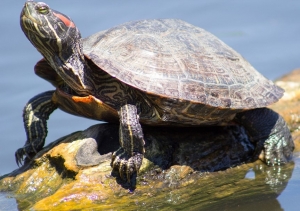 Identification: Red-eared sliders (Trachemys scripta) are semi-aquatic turtles with a distinctive red-orange stripe behind both eyes that distinguishes it from other turtles. Their body is covered with green and yellow stripes and they have webbed feet with short claws. Their shell averages 6-8 in, with female red-eared sliders typically larger than males. Shells of young are leaf green and get darker as they age, becoming olive green-brown. The bottom of their shell is a light yellow with dark markings. The colors of their body and shell help them stay camouflaged. Red-eared sliders can withdraw their body into their shell for protection when they feel threatened. They spend most of their time in water, although do bask in the sunlight on logs or rocks close to or in water. The lifespan of a red-eared slider is typically 20-30 years. 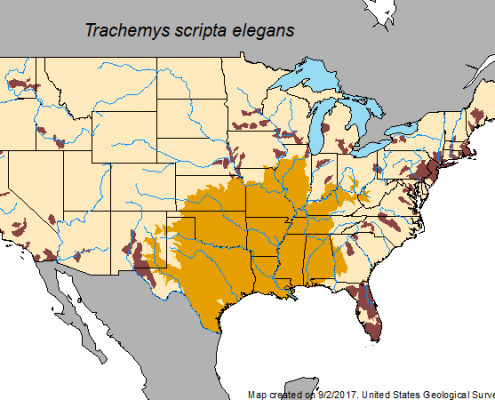 Range: The red-eared slider is found from northeastern Mexico to northern Illinois. They are as far west as eastern New Mexico and as far east as West Virginia and a small portion of southern Ohio. Arkansas is at the center of their range.

Ecology: These turtles are typically found in any body of calm, warm, freshwater. They cannot regulate their body temperature on their own and must rely on the temperature gradients of their environment. They bask in sunlight to keep warm and submerge themselves in water to cool off. They are often seen on rocks or logs basking in groups, and rarely leave the water except to bask. These turtles are highly adaptable and can tolerate many different habitats.

Red-eared sliders are very popular as pets, so large numbers are commercially raised throughout the southeastern United States. The FDA has restricted the sale of the eggs and turtles smaller than four inches because of Salmonella infecting humans who have handled turtles. Reptiles do not show effects of having this bacterial infection. Therefore, healthy looking but infected turtles can pass the bacteria to humans, especially small children, who have them as pets. This can be prevented by teaching children that they need to wash their hands after they handle or feed the turtle.

Red-eared sliders are omnivores that consume insects, fish, frog eggs, tadpoles, and a wide variety of aquatic plants and algae. Adults are more herbivorous than the young, although both will opportunistically eat insects and fish.

Mating occurs from March to July. Males court females by swimming around them and brushing their head and face with the backside of their claws. If the female accepts the male, she will sink to the bottom to mate. If she does not accept the male, she will become aggressive. Courtship is a long process but mating only lasts about 10 minutes. Females lay between two and 23 eggs in each clutch, and up to five clutches in a year. When a suitable spot has been found, the female will dig a hole with her back legs and lay her eggs. There is no parental care for the young and sex is determined by the temperature of the environment with males developing at colder temperatures and females developing at warmer temperatures.

Special Notes: Here in Bella Vista, red-eared sliders can be found in the lakes, streams, and golf course ponds. The best time to observe them is on cool sunny mornings basking in the sun on floating logs or near water. The distinctive red spot on the side of their head can be seen from a distance and helps with identifying them.