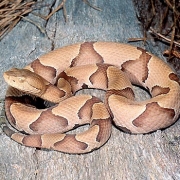 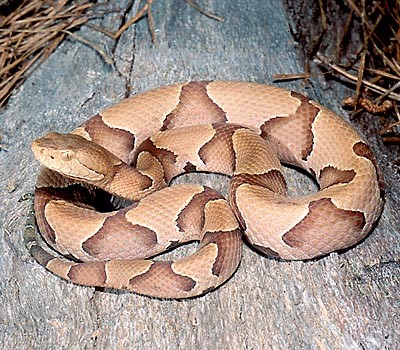 Identification: Copperheads are heavy bodied venomous snakes in the pit-viper family. They have tan-brown bodies with dark brown hourglass shapes lining the length of the body. The hourglass shapes are narrower toward the top of the back and get wider as they go down toward the stomach. These make them highly camouflaged in forested areas, especially with abundant leaf litter. There are pit glands in the head between the eye and nostril that sense heat and help identify prey and predators. Their eyes blend in well with the color of their skin and they have dark black vertical pupils (cat eyes).  Juveniles resemble adults but have yellow tails. Copperheads can range in size from 20-40 in. with males being larger than females. 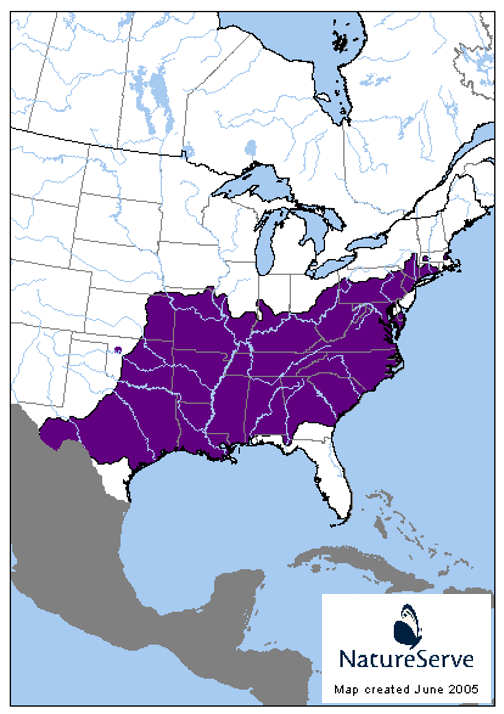 Range: Agkistrodon contortrix is found in the eastern and central United States, except most of Florida.

Ecology: Copperheads mostly prefer forests with rocky, wooded hillsides that have plenty of logs, leaves, or rocks for cover. They can also be found near streams, wetlands, urban and suburban habitats. Although copperheads are adaptable to different habitats, they do avoid areas that are open like pastures or fields used for farming. They can be found at any time, day or night. In the warmer seasons they mostly forage at night. They can be seen basking during the day or coiled in ambush positions.  In forest areas with a lot of leaf litter, they are almost impossible to see, especially when coiled and still.

Copperheads are venomous, although their venom is not very potent compared to other pit vipers. Deaths from copperhead bites are very rare and most bites occur from stepping on or harassing a snake. Many times, a copperhead will “dry bite” when harassed or disturbed, meaning it does not inject any venom. Symptoms of a copperhead bite include pain, tingling, swelling, throbbing, and nausea. A large dose of venom can cause damage to muscle and bone tissue.  Medical attention should be sought from any bite in case an allergic reaction or infection occurs. There are anti-venoms used to treat snake bites, although sometimes the symptoms from them are worse than the snake bite itself. The best thing to do when seeing a copperhead is to leave it alone and give it space. It is also a good idea to pay special attention to where you are walking, especially in forested areas where spotting snakes is difficult.

Copperheads feed on a variety of prey. They eat primarily mice, but also small birds, lizards, other snakes, amphibians and cicadas. They are primarily ambush predators, staying coiled and camouflaged until prey comes within striking distance, although they will actively prowl for some prey items, like cicadas. Their main predators are humans and vehicles.

Mating occurs in the spring. Males move in search of females and will fight each other in a vertical stance where the top thirds of their bodies entangle. Females give birth to 7-10 (up to 20) live young in the summer.  Females do not reproduce every year. The young are born at around 8 inches in total length and resemble the adults but are lighter in color and have yellow on the tips of their tails. The young use their tail color to lure in prey such as lizards and frogs until they get close enough to attack.

Special Notes: Here in Bella Vista, copperheads could potentially be seen anywhere. Remember that their hourglass bands are narrower on the top of their back and then widen as they move toward their stomachs. This patterning helps distinguish them from the northern water snake which are much more common here. Many snakes are mistaken for copperheads, which gets them killed. The hourglass bands, triangular head, and pit glands can all be used for identifying copperheads. While many people dislike snakes and want to kill them, remember that most snake bites occur because humans try to interact with the snake in some way. They also perform the important ecological function of keeping rodent populations down. It is best to leave these snakes alone and give them plenty of space if seen in the wild.