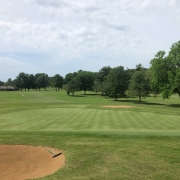 The project on #1 Green at BVCC has been a long but very beneficial process. Since the damage to the green occurred from a malfunctioning greens spray combined with the underlying problem of damaged drainage, progress has been made to get the green back into healthy and playable conditions.

New drainage was the first step of the process. While the drainage is certainly not as good as a newly constructed green, it has certainly made a very positive difference. After the new drainage was replaced, our team sodded and plugged some of the weaker areas and the green started to recover on its own. We were hopeful at that time that the green would be open sooner rather than later. However, frigid temperatures hit and the green and the sod took a few steps in the wrong direction. It was very apparent at that time that if the green could not withstand the extreme cold, then it had little chance to withstand the extreme heat of the summer. The only choice was to re-sod when temperatures were favorable.

During the last week of March and the first week of April temperatures started getting into the 60s and 70s during the day and only down into the 40s at night and soil temperatures climbed back into the 50s. While these temperatures are not great for bentgrass shoot (grass) growth we knew that new sod would be able to withstand the conditions and eventually grow roots. At this time our team, along with the help of other golf maintenance teams, re-sodded the middle section of the green.

Since re-sodding, the green has flourished. The spring weather has given the sod favorable conditions for root growth and shoot growth. Through heavy topdressings and other cultural practices, our team has worked diligently to get the green healthy so that it could withstand the stress that comes with getting the green ready for play. The final step has been to lower the height of cut, which takes time to keep the green healthy. It was important to our team that we push to lower the height of the green as hard as we could to get it open for our members. With this, a little scalping has occurred, specifically on the edges of the green, but nothing that should not recover with time.

We are ecstatic to announce that #1 green will be open for play on Thursday May 30th! Please note, that while we intend #1 green to roll the same as the others, you may notice a little difference for the time being. Overall the green is rolling relatively smooth but may have some bumps here and there due to the sod. It may also roll a little slower than the rest, but given time, we expect it to be like the rest of the greens and you will not notice that work was even done to this green!

Our team would like to thank everyone for their patience as we went through this process. It may not have gone as quick as we all would have liked, but hopefully the work we put in and the patience you all have shown, will pay off and the green will have great health and play-ability through the rest of the year. I hope you are ready to putt into a regulation size cup again and no more automatic 2 putts!! See you on #1 green May 30th!