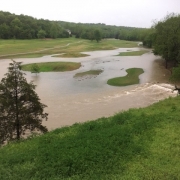 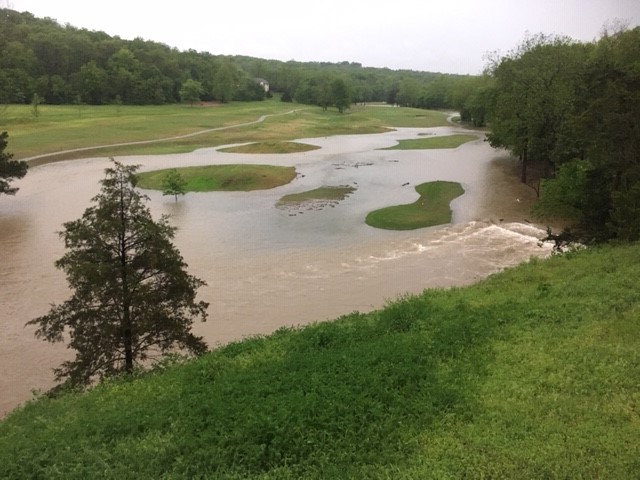 Spring rains have arrived, and they have brought a mess. The first day of May brought in over 5 inches of rain overnight leading to flooding with more being forecasted. It is something that happens and is out of our control. We do our best to prepare for it, but there are always cleanup and issues that come from big rain events.

With heavy rain comes excessive runoff from creeks flowing out of the banks, lakes spilling over, and drainage from surrounding streets. Debris, such as leaves, limbs and gravel that have been collecting in ditches over winter are finally forced down and out by the rushing water, especially when it comes as fast as it did over a short period of time. All this mess gets caught up in the rush of water until it reaches a low area where it settles. This happened to Scotsdale on several holes such as 3 and 10. 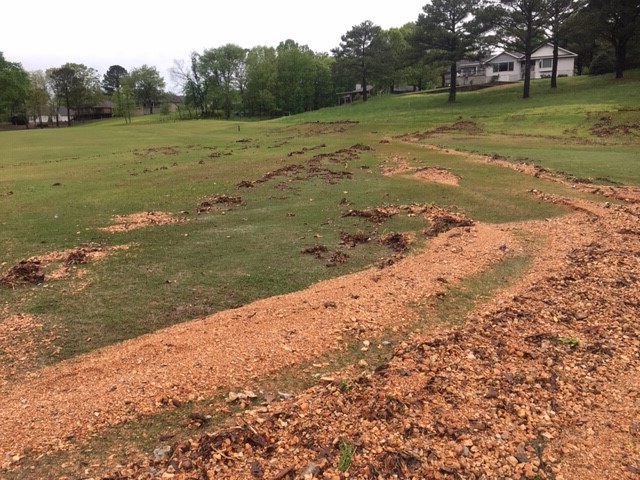 The first thing we do in these events is to pick up small debris we can safely access. At Scotsdale, we had to wait until the water receded below the bridges and check that they were not damaged before we could begin cleanup on the front 9. This is the reason we concentrated on cleaning up the back 9 first, which allowed us to open 9 holes several days earlier. 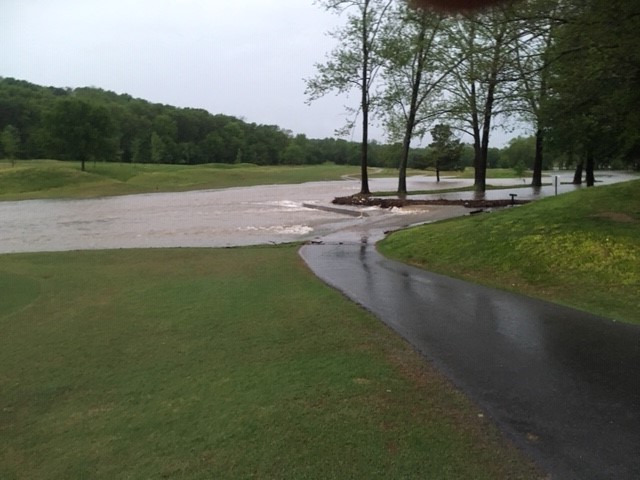 Debris such as leaves, and small branches are picked up first. This debris is unsightly and is generally the easiest and quickest thing to clean up. At times this debris may be in an area too wet to get to, so it will be necessary to come back to these later. We then start working to pile up the gravel that collected in areas. This is where continual rains make the job difficult because we need to let the ground dry up before we can get heavier equipment on the turf, thus minimizing damage. After the bulk of the gravel is picked up, we come back with a broom that cleans the area even better. This broom is also used for cleaning up collected soils (silt) that has been deposited onto the turf.  If we didn’t use the broom, the gravel would cause damage to the mowers later. With the weather continually bringing in rain and keeping the ground saturated we may need to keep a hole closed until we get to it or change it by making it shorter and keeping play off the effected areas. An example is number 3 at Scotsdale. The middle fairway has so much gravel on it and stays so wet that we have made it a par 3 until we can get it off. Sometimes areas are prone to collecting more silt than anything else. Silt deposits are damaging in the long run because it hinders the soils ability to exchange gases and retain oxygen while decreasing drainage and infiltration rates. Silt is shoveled off first and squeegees used to complete the cleanup. To correct these areas for the future health of the plant will require the areas be aerated to bust up the layer caused by the silt (and improve soil). This will enhance gas exchange capabilities and improve overall drainage.

Another issue is the water begins to channel into areas leading to washouts. These are areas where the water is coming in so hard that it begins to erode the ground. We will come back later and repair these. We add in a heavy soil like clay that can compact and top it with rip rap or sod depending on the location. It is not a difficult fix usually, but like cleanup, its difficult to accomplish with saturated soils around it. 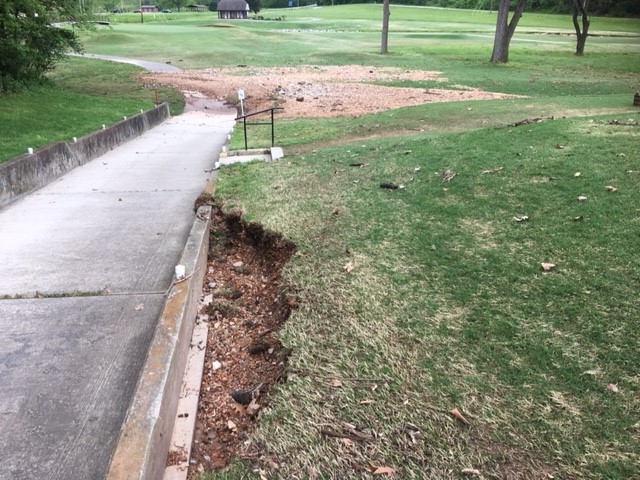 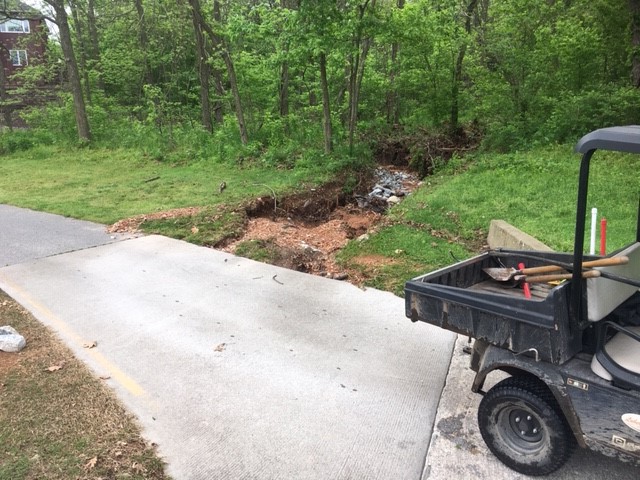 An additional problem brought in with the flooding and washouts is the issue of weed seeds being introduced to areas through runoff. In heavy rains and flooding of turf areas, weed seeds are brought in to maintain those areas with running water (from outside areas) and deposited onto areas such as fairways and tees. Normally, we treat these areas with a pre-emergent herbicide to aid in control of weeds and keep the population as low as possible. With flooding, the pre-emergent herbicide we use to help suppress weeds gets thinned out by the excessive moisture. This leads to a faster breakdown of control and more chances for weeds to establish.  So, this means after cleanup we have another issue with getting these weed populations under control. This is an aftermath effect of flooding and, like cleanup, uses up resources and time that would have been used for elevating conditions instead of getting back to square one.

With the ground very wet and more rain continuing to fall, one of the biggest issues we face is getting back on track with mowing. We are doing what mowing we can when we can with the biggest focus on greens right now and then everything else. As much as it pains me, sometimes this means we try and get mowing done during wetter than normal conditions and leaving tracks. We do our best to stay away from the wetter areas though and come back to these areas as quickly as we can.

Each of the courses are different but we still share a lot of the same issues. The biggest shared problem we have is lost time. We work hard to continually make the courses better but when these events happen, we must work hard just to get back to where we were. We lose time in cleanup that could be used to fertilize, mow, spray, and make other overall improvements. This time adds up and course conditions suffer. We will work diligently to not only repair but make the courses better. It takes time, but we will get the job done. We appreciate the support and understanding from everyone and look forward to seeing everybody enjoy the courses and have a great time playing.