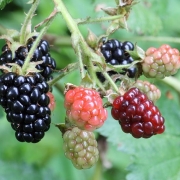 Identification: The blackberry is an edible fruit produced by plants in the genus Rubus. Since there are many species in this genus that all hybridize with each other, it is hard to tell species apart. The blackberry plant superficially resembles the raspberry, although it can be easily distinguished by the removal of the fruit. When picking a blackberry off the stem, a part of the stem will often come with the fruit. When picking a raspberry, the stem remains on the plant and leaves a hole on the inside of the raspberry. For a first-year blackberry cane reaches a full length of 3-20 ft. depending on species. The leaves are large with 5-7 leaflets. A two-year-old blackberry cane grows side stems that will flower and have smaller leaves. Stems are covered with short, curved prickles that are extremely sharp. The blackberries appear to be bumpy on the outside and have numerous large seeds. When ripe, they are black, juicy and delicious. Before the blackberries become ripe, they are red, which caused the saying “blackberries are red when they’re green”. The flowers of a blackberry plant have white or pale pink petals, usually 1 inch across.

Range: Species of Rubus are found in Europe, North America and Mexico. Mexico is the primary cultivator of blackberries, especially in the off season for North America and Europe. The blackberry may have up to 700 species within the genus all of which hybridize regularly.

Ecology: The leaves on a blackberry plant are food for several caterpillars and deer. The blackberries are eaten by many mammals including the red fox, badger, black bear and small birds. These animals also help in dispersing the seeds of the blackberry plants. Plants grow rapidly almost anywhere and can thrive even in poor soil.  Flowers bloom in late spring or early summer. In many countries where blackberries are not native; like Australia, Chile and New Zealand, they are considered invasive and a weed.

Blackberries have many uses for all the nutritional benefits they contain including dietary fiber, vitamin C, vitamin K and antioxidants. Some people do not like them because of their abundant and large seeds, although the seeds contain oil rich in omega-3 and 6 fats, as well as other nutrients. Blackberries are popular to eat as-is, or to use in jams, desserts, wine and candy.

Since blackberries are in the same genus as raspberries, they often get the same diseases as well. Anthracnose is a disease causing the berry to ripen irregularly and also slows sap flow. A cure for this disease is the Bordeaux mixture which contains lime, water and copper sulfate. A major nuisance of the blackberry plant is the spotted-wing drosophila Drosophila suzukii, a small fruit fly that lays eggs under the skin of the blackberries. The eggs will eventually hatch and grow in the fruit, causing it to be useless for commercial value. The blackberry aphid, Amphorophora rubi, will eat the berries of both plants.

Special Notes: Here in Bella Vista, blackberries occur along roadsides, power line right of ways, wood lines, and nearly everywhere that doesn’t receive regular mowing. Many Bella Vista residents enjoy foraging for these berries in early summer. When engaging in this activity, use insect repellents to minimize contact with ticks and chiggers.

They make great jellies, pies and cobblers, but the wild form is small and very seedy. Much larger cultivated varieties are available, and many do not have thorns. The newest varieties bare on first year canes giving two distinct crops per year. They are easy to grow and a much tastier and cheaper alternative to buying them at the supermarket.