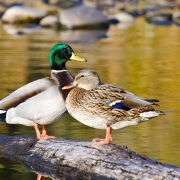 Identification: The mallard Anas platyrhynchos is a medium sized duck. They are 20-26 inches long and have a wingspan of 32-39 inches. Mallards normally weigh around 1.5-3.5 lbs. Breeding males, called drakes, are distinctive with their iridescent green head, white collar, purple-tinged brown breast, grayish brown wings, and a pale gray belly. The back of the male is black with white borders on the tail. The bill of the male is yellowish orange with a black tip. Females, called hens or ducks, have a mottled body with each separate feather having distinction from cream to very dark brown. They have a cream-colored head and neck with a darker brown on the top of the head and a stripe through their eye. The bill of the female is normally darker than that of the male ranging from black to mottled orange. Both males and females have feathers on their wings that are shimmery purplish-blue, edged with white. These feathers are most often seen at flight or rest. During annual summer molt they temporarily shed these feathers. 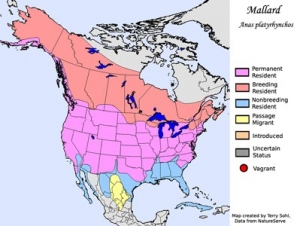 Range: The mallard occurs across North America. In the northern parts of their breeding range, they are intensely migratory, moving farther south in winter.

Ecology: Mallards reside in many different habitats and climates, from Arctic tundra to subtropical regions. They can be found in both fresh and salt waters. They are also found in the open ocean as long as they can see the coastline. Mallards favor waters with depths less than 3ft and abundant aquatic vegetation.

Mallards usually find mates for breeding around October and November. They will remain together until the female lays eggs in early spring. Males then join with other males forming groups through the molting period in June. Females lay more than half their body weight in eggs, which is very stressful. They require a lot of rest and a feeding area away from predators. Nesting sites that are hidden and unapproachable by ground predators are preferred. They lay 8-13 eggs and incubate them for 27-28 days. It takes 50-60 days for ducklings to get their flight feathers. Ducklings are fully capable of swimming when they hatch, however, they instinctively stay near the mother for warmth, protection, and to learn where to get food.

Mallards are omnivores, consuming invertebrates, crustaceans, worms, seeds, plant matter, small fish, frogs, snails, and roots. Plants normally make up more of their diet during migration and in the winter.  They usually feed by dipping for plant food or browsing.

Special Notes: Mallards are the most familiar duck to most people, and well adapted to living around human activity. Many are even semi-domesticated and have learned to live on handouts around city parks and lakes. Feeding waterfowl is unhealthy for the birds and should be avoided.