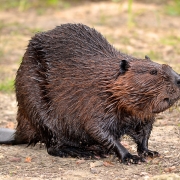 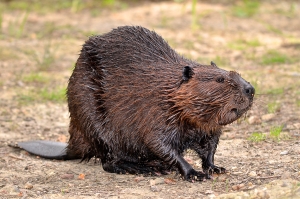 Identification: The North American beaver, Castor canadensis, is the largest rodent in North America. They could be mistaken for a nutria, but nutria do not have the large flat paddle-shaped tail like beavers. Adults weigh from 24-71 lbs. and their body length ranges from 29-35 inches and the tail adds 8-14 inches. The beaver has many adaptations that lend them to a life in the water. The beaver has webbed hind feet and smaller, un-webbed, front clawed feet. When underwater, beavers’ eyes are covered by a membrane that allows them to see and they can also close off their ears and nostrils when underwater. Their fur consists of long, coarse outer hairs and short, fine underfur for insulation. Fur is normally dark brown, and they have large, strong, incisor teeth used for cutting down trees. These teeth grow continuously so they do not get worn down. Scent glands located next to their genitals secrete an oily substance called castoreum, which makes their fur waterproof. Beavers also have a flap in their throat that makes it impossible for them to accidentally breathe through their mouth while underwater. 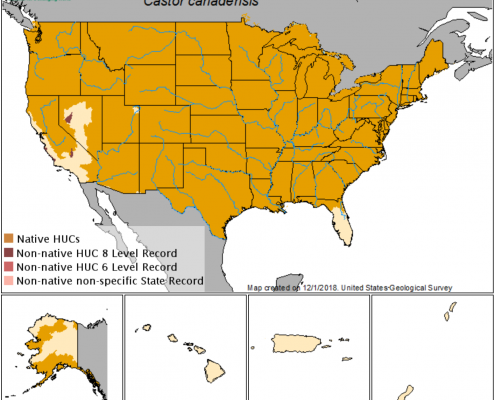 Range: The beaver is native to Canada, the United States, and northern Mexico. It’s found throughout North America except the arctic tundra, peninsular Florida, and deserts in the southwestern United States. Beavers have been introduced in many other countries around the world.

Beavers were nearly extirpated due to the fur trade in North America during the 1800’s. By the end of the 1800’s, beavers were eliminated from most of Arkansas and were reintroduced in the 1940’s. They are now considered a pest in many areas because of flooding caused by dams and felling of trees.

Ecology: Beavers are active on land and in water and are mainly nocturnal. They inhabit permanent water-bodies including lakes, streams, ponds and rivers. They are excellent swimmers and can remain underwater for up to 15 minutes. Due to vulnerability to land predators, they prefer to stay in the water. Their large paddle-like tail is not only used for swimming, but also as fat storage and to signal danger by slapping it on the surface of the water. Common predators include coyotes, wolves, mountain lions and black bears.

Beavers construct their homes, or “lodges,” out of sticks, twigs, rocks and mud. These mounds have underwater access and are surrounded by water. Lodges can also be burrows dug into banks. They are well known for building dams across streams and then constructing their lodge in the pond that forms. Lodges normally have several entrances underwater and two platforms above the water surface that they dry off on. Towards winter, beavers cover their lodge with mud, which is like concrete when frozen, helping keep predators at bay. A small air hole is left in the top of the lodge. The purpose of the dam is to create deep water allowing the beaver to escape from terrestrial predators. If deep water is already present in a water-body, the beaver will burrow in the bank and make an underwater entrance.

Beavers mate between late December and May, commonly in January. Beavers are monogamous, mating with one partner for multiple breeding seasons, usually for life. Females have one litter per year and the young “kits” typically remain with their parents for up to two years. Females have an average of 2-3 kits per litter.

The North American beaver consumes bark, twigs, leaves and aquatic vegetation, because, unlike most mammals, beavers can digest cellulose.

Beavers are considered pests in many areas because of their destructive nature, however, they help many waterfowl and fish species by creating habitat. Trumpeter swans and Canada geese often depend on beaver lodges as nesting sites. Their dams and lodges also provide habitat for many fish species. The presence of beaver dams has been shown to increase either the number of fish, their size, or both, in studies of trout species.

Special Notes: Here in Bella Vista, beavers usually do not cause many major problems. Occasionally, beavers chew the bark from land owners’ trees, or they may chew through a wooden seawall to make a lodge in the bank. Beaver numbers are low as is resulting damage.