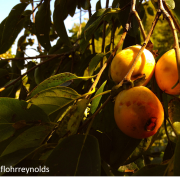 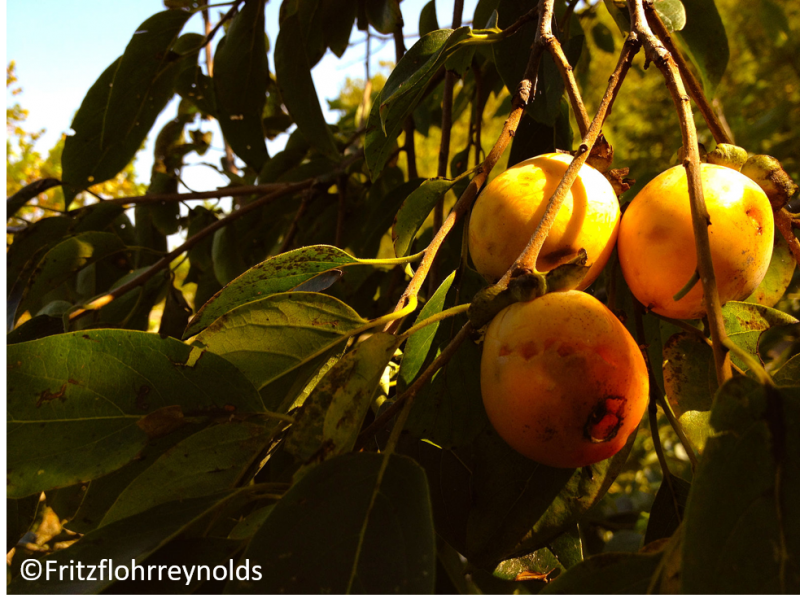 Identification: Persimmon refers to several species in the genus Diospyros. The species present in Arkansas is the American persimmon. The American persimmon Diospyros virginiana is a small tree usually 30-80 feet in height, with a short, slender trunk and spreading branches that form a rounded covering. Large specimens can grow to 115 feet. The roots are thick, and the bark is dark brown to dark gray with a rough surface.

The wood from a persimmon is very dark, heavy, hard, close grained, and strong: a true ebony and a valuable decorative wood. It remains a favored club head for golf clubs. The leaves are 4-6 inches long, oval, and thick. They are dark green when fully grown and pale underneath and in autumn turn orange or reddish. Persimmons produce fragrant flowers and fruit, called persimmons or “Simmons.” The fruit is round, being 0.8-2.5 inches in diameter, pale orange to red in color, and contains 1-8 seeds. When ripe, the fruit is sweet and delicious, but bitter when green.

Range: The American Persimmon is native to the eastern United States, ranging from southern Connecticut to Florida, and west to Texas, Louisiana, Oklahoma, Kansas, and Iowa. Persimmons grow wild but have been grown for both fruit and wood. They reach their largest size in the basin of the Mississippi River.  Other species of persimmon grow around the world, including several in Europe, Asia, North and Central America.

Ecology: Persimmons favor light, sandy, well-drained soil, but will grow in other soils. Individual trees vary in the quality, appearance, and size of fruit, with some producing inedible fruit. A common myth is that persimmon fruit needs frost to ripen. While frost can stimulate the ripening process by breaking down cell walls, it is not required, and can lead to damaged crops.

Persimmons are valued for both wood and fruit. The fruit is a berry that, when ripe, is sweet, juicy, and delicious. A common joke is to have someone eat an unripe persimmon as it is very bitter and likely to make them pucker. The fruit ripens in late autumn and can be eaten raw, dried, or cooked. It is rich in vitamin C, and is used for many things, including molasses, coffee substitutes, pie, pudding, candy, beer, wine, and brandy. Tea can be made from the leaves as well. The dark ebony heartwood is valued as an ornamental wood; it is hard and has a smooth, glossy finish when polished.  However, it can take 100 years to grow any of the dark heartwood.

Because of the many uses of their fruit, wood, and leaves, persimmons are important economically.  Many species and cultivars of persimmon are grown commercially all over the world. Some of these cultivars include early golden, woolbright, and the ennis, a seedless variety. Many species of Diospyros bear fruit inedible to humans. Commercial species are grown in Mexico, the Philippines, Japan, China, and Korea that produce edible fruit.

Special Notes: Here in Bella Vista, persimmons can be spotted in the fall by looking for the fruit as it turns from green to bright orange. Persimmons are a favorite fruit of many animals including the opossum, raccoon, squirrel, fox, skink, deer, turkey coyote, and quail. Residents should be on the lookout for animals traveling to and from known persimmon stands during fruit drop. Harvest for human consumption is best timed around Thanksgiving when the fruit begins to turn soft. By doing so, you avoid the bitter taste and astringent qualities of unripe fruit.