Blog
You are here: Home1 / Blog2 / Lakes3 / Tips to Help Ensure the Survival of Released Fish 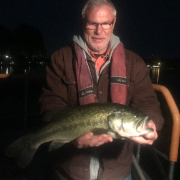 There are few things more disheartening to a fisherman than to kill fish that are intended for release.  Don’t get me wrong, it is perfectly fine to catch a limit of 12-inch bass and take them home for dinner.  As a management practice here in the Bella Vista lakes, it is even encouraged. If you want to harvest fish, they should go directly on ice as they are caught.  Fish that are intended for release are often unintentionally killed when anglers make a few common mistakes.

Generally, larger fish are more susceptible to mortality after being caught than small fish. To avoid mortality, bring the fish in quickly and do not play the fish to exhaustion. Ultralight rods and line rated for small fish should be avoided as it prolongs the fight. Exhaustion and excessive handling causes the release of cortisol (stress hormone). This in turn compromises the immune system and encourages infection.

It is best to leave fish in the water as the hook is removed. If this is not possible, handle the fish with wet hands. Towels and abrasive boat carpeting should be avoided because it rubs off the protective mucus coating and lets pathogens in. Fish rubbing against the sides of a live well for hours before being released can have the same effect. On hot summer days, live wells can more appropriately be named “death traps”. Fish that are released in seemingly good condition can succumb up to two weeks later from infection.

To ensure the release of healthy fish, make sure you have all equipment to record a memorable moment including a camera, scale, and measuring device. Avoid exposing the fish to air for longer than 30 seconds especially on warm or windy days.  Recording the event and releasing the fish quickly will result is its best chance for survival. Large fish can be hard to come by. With proper care, they can be “recycled” for the enjoyment of other anglers.

“Keeping Bass Alive” by Gene Gilliland and Hal Schramm is an excellent resource on the subject.  Useful excerpts are available at:  https://www.bassmaster.com/sites/default/files/bassmaster2011/imce/KeepingBassAlive_guidebook%20comp.pdf