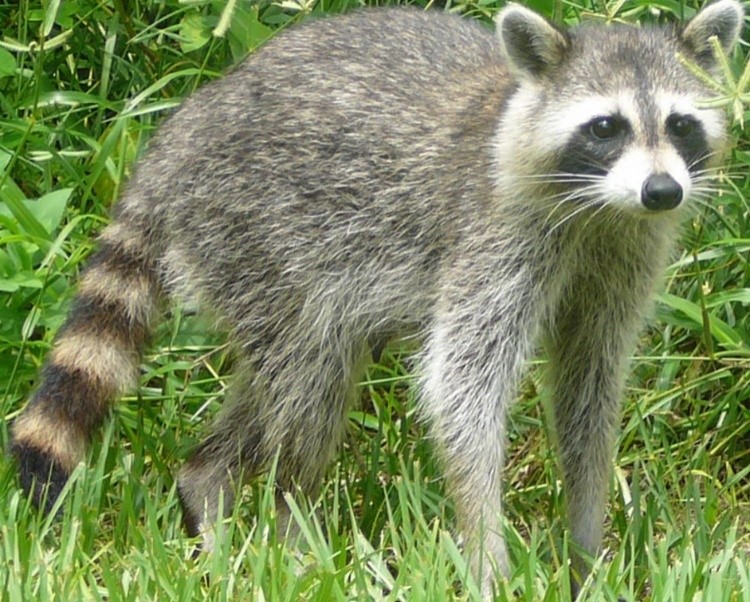 The northern raccoon (Procyon lotoris) is a medium-sized mammal most recognizable by its “mask”; the black fur around the eyes that contrasts with their white face and distinct ringed tail. Raccoons measure 16-28 inches in length, not including their 10-inch tail. The shoulder height ranges from 9-12 inches. They can weigh from 4-60 lbs. but are commonly 10-30 lbs. Raccoons in the northern limits of their range tend to be larger. This is an adaptation seen in many mammals to combat heat loss in cold weather. Raccoons also have a dense underfur that insulates against cold weather, making up almost 90% of their coat. Their bushy tails have alternating light and dark rings, and their slightly rounded ears have a white border. The body is various shades of gray and brown. They are extremely dexterous and are able to stand on their hind legs to inspect objects with their nimble front paws.

Raccoons are common within their range and occur from southern Canada through central America.  They inhabit nearly all the continental United States. Because of deliberate introductions and escapes, they are now found in several European and Asian countries. Raccoons are extremely adaptable and occupy diverse habitat from mountains, deserts, to costal marshes and urban areas.

Raccoons have comparable movement speeds to humans: 10-15 mph for sprinting and 3 mph for swimming. Being able to climb down a tree headfirst is unusual for a mammal of its size, but raccoons manage this feat by rotating their hind feet backwards for a better grip. Raccoons sweat and pant which aid in the dissipation of heat in summer.

Raccoons have gender-specific social groups. Females share a mutual area and sometimes meet when feeding or resting and are often related. Males not related to each other form groups to protect their territory and mating status against rival males. These male groups are small, consisting of up to four individuals. Raccoons’ home ranges vary depending on age, sex and habitat. Adult home ranges are double that of juveniles. Odor marks using urine or feces establish home ranges and are used for identification.

The diet of raccoons is highly variable and can consist of insects, worms, fruits, nuts, fish, amphibians and bird eggs. They will occasionally eat birds and other mammals, although they prefer easy to catch prey. They are typically nocturnal, but will sometimes be active during the day as they are opportunistic feeders.

Raccoons usually mate from January – March, but there can be differences depending on location. Raccoons in southern states tend to mate later. Males will constantly roam their home ranges to court females. Females can mate with more than one male over several nights. A litter usually ranges from 2-5 young called “kits” or “cubs,” which are blind and deaf when born. The young are weaned from their mother by 16 weeks and begin to split up. The females stay close to their mothers’ home range, but the males sometimes move more than 12 miles away. This natural behavior inhibits inbreeding. The life expectancy for wild raccoons is 2-3 years, although captive raccoons have lived for more than 20 years.

Here in Bella Vista, raccoons can be seen commonly at night and are considered pests by many residents. They routinely overturn small waste containers or tear garbage bags apart in search of food.  The increasing number of raccoons in urban areas has resulted in different reactions from homeowners, from frustration to deliberate feeding. Feeding raccoons may cause them to become more of a nuisance and dependent on humans as a food source. Raccoons in search of food can break into poultry houses to feed on chickens, chicks, their eggs or feed. They will also feed on domestic cat and dog food. If raccoons become a problem, all food and garbage cans should be tightly sealed or locked in a container.

Additionally, where raccoon populations are high, associated diseases and parasite outbreaks increase.  Raccoon roundworm, leptospirosis, salmonella, rabies, distemper and mange are just a few that can be transferred to humans and/or pets.

Raccoons can be a nuisance, they are neat mammals to see and watch due to their high intelligence and problem-solving skills.