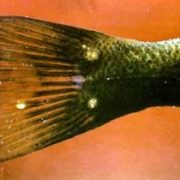 Identification:
Yellow grub Clinostomum marginatum is a parasitic flatworm, known as a fluke. It appears yellow when buried in flesh and can develop up to 0.25 inches in the flesh or on the fins of freshwater fish. In its second stage of life, the parasite has 3 eyespots located on the middle of the back in a triangle pattern.  They can look different depending on what type of habitat. Some yellow grub found in herons appeared to be smooth and thick.

Black spot is caused by another flatworm larvae in the Genus Neascus that develops in freshwater fish.  It develops a black cyst around 0.04 inches in diameter on the skin, fins, or flesh of the fish.

Range:
Yellow grub and black spot are both found in many freshwater fish, snails, and birds all across North America. 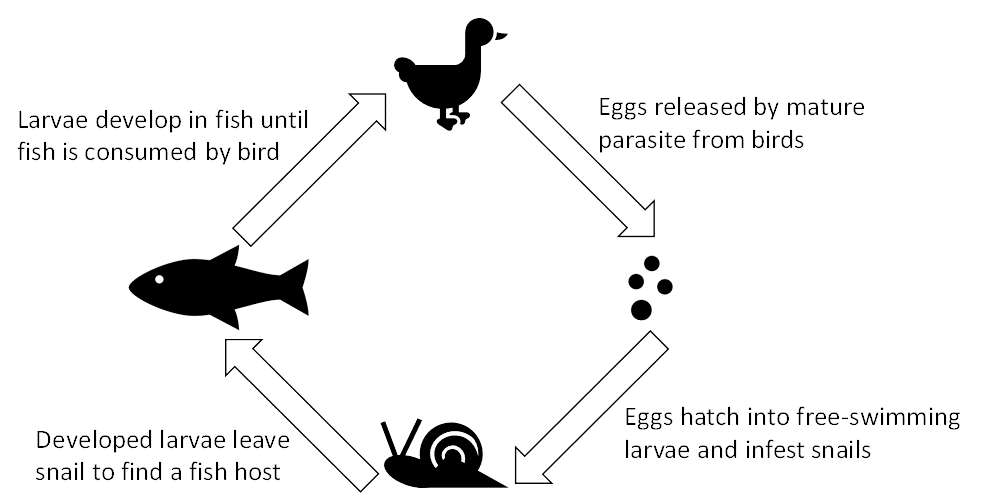 Ecology:
Parasites feed on the host by draining nutrients from blood and fluids or attacking specific organs or body parts for nutrients. These parasites are no exception. No fish are known to be resistant to these parasites, although fish generally tolerate them without issue.

The life cycles of yellow grub and black spot are very similar. The life cycle involves two transitional hosts (snail and fish) and a final host (bird). Eggs are first released by mature parasites living in birds by the mouth of the bird (yellow grub) or by bird droppings (black spot). The eggs hatch and free-swimming larvae pierce the foot of snails for further development. If they cannot find a snail host, death occurs in a few hours. Once they have further developed in the snail, they exit and become free-swimming again in search of a fish host. Once burrowed inside the fish, the parasite grows into yellow grubs, or form a black cyst in black spot. The parasites can live inside the fish for several years until the fish is eaten by a bird. The parasites mature in the final bird host, and the cycle repeats.

In general, infestations of these parasites do slight damage to adult fish, although, heavy infestations around the eyes can cause blindness. Juvenile fish are more susceptible to these parasites. Stress can lead to secondary infections causing death in a small percentage of individuals. These parasites are unable to infect humans and infected fish can be consumed without issue, so control is normally not necessary.

Special Notes:
In Bella Vista, both yellow grub and black spot can be found in fish, but they are relatively rare. Fish taken out of Tanyard Creek were found with black spot, and both parasites have been witnessed in our reservoirs. Many people find an infested fish unappealing to eat, but these parasites are not harmful to humans, and cooking an infested fish will kill any parasites. It is also easy to pick out yellow grub with tweezers or the point of a knife while cleaning.

Snail eating fish effectively break the life cycle of these parasites. Our large and abundant redear sunfish, or “shellcrackers” as they are commonly called, consume our snails and limit these parasites.