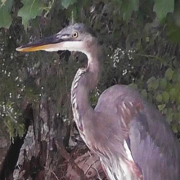 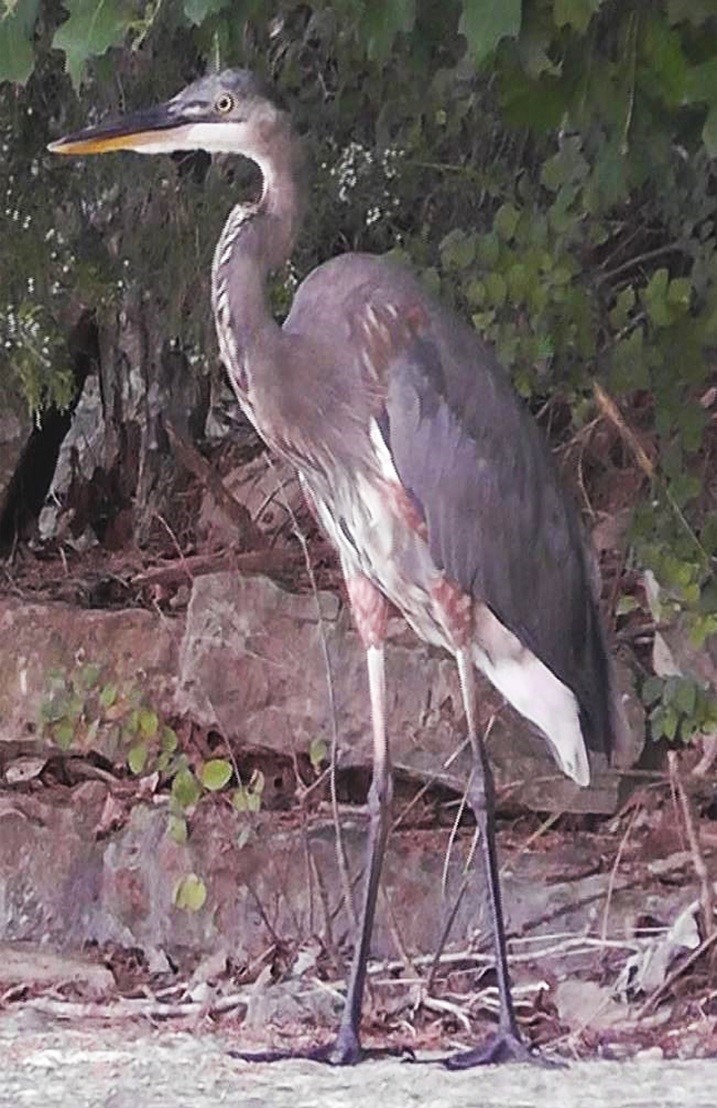 Identification:
The great blue heron (Ardea Herodias) is the largest North American heron. It can easily be distinguished from the tricolored heron (Egretta tricolor) by its larger size and darker belly. The massive size of the great blue heron makes it easily distinguishable from the reddish egret (Egretta rufescens) and the little blue heron (Egretta caerulea). From head to tail, the great blue heron ranges from 36-54 in. Its wingspan is 66-79 in.; height is 45-54 in.; weight is 4-8 lbs; and stride of 9 in. Great blue herons are huge, long-legged, long-necked waders. They usually hold their neck in an “S” shape at rest and at flight, and they have a long, thick, yellow tipped bill. Adults have a white face with black extending from the eye to beyond the back of the head. The neck of adults is brownish with a black-bordered white stripe down the center and can have shaggy feathers. Two of the three front toes are generally closer together, with small talons on both the front and back toes. The yellow bill and grayish legs become orange briefly at the start of breeding season. Young great blue herons lack shaggy neck feathers and black marking that extends from the eye. 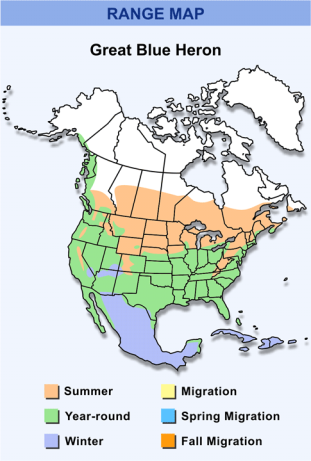 Range:
The great blue is found throughout much of the United States year-round, and in parts of Canada during the summer months. In winter, great blue herons can be found in most all of Mexico and as far south as the Caribbean to South America. Great blue herons are year-round residents in the southern United States and the lower Pacific coast. However, some individual birds may stay through cold winters in northern areas, if fish-bearing waters do not freeze over.

Ecology:
The great blue heron can adapt to almost any habitat in its range. It can be found in fresh and saltwater marshes, swamps, flooded areas, lakes, or shorelines. It may be seen in urban areas as long as there are water bodies that support fish. They tend to stay near water bodies, although they can sometimes be seen flying over highland areas. Except when breeding, great blue herons defend their feeding territories from other herons with intense displays, approaching intruders with their head thrown back, wings outstretched, and bill pointed upward.

Breeding occurs from December (warmer climates, to March, (colder climates) in colonies that are called a heronry. The size of the colonies can be huge, averaging 160 nests. Great blue herons make nests in trees that are usually close to ideal feeding spots. Any type of tree can be used, but when trees are not available, they may nest on the ground, on artificial platforms, on beaver mounds, or duck blinds. Nests are made out of sticks and are often reused for many years. Great blue herons mate with one partner for a breeding season, but usually choose new mates each year. Males arrive at the colonies before the females, choose a nest, and then court females as they pass through. Females lay 3-6 pale blue eggs at two-day intervals. Eggs are generally laid from March-April and are incubated around one month by both the males and females. They hatch over a period of several days. Both parents feed the young by regurgitating. Parents eat up to 4 times more when they are feeding chicks. At 45 days, the chicks are nearly fully grown. It takes 60 days for chicks to get their flying feathers. After their first flight, the young return to the nest where they are fed by their parents for another 3 weeks. They gradually disperse away from their nests and parents. As with humans, fishing is a learned art. It takes up to two months for the young to approach the fishing efficiency of adults.

Great blue herons consume primarily small fish, though they are also known to feed on shrimp, crabs, aquatic insects, rodents, reptiles, and amphibians. The prey consumed depends on accessibility and quantity. Herons find their food by sight, stalk their prey, and swallow it whole. They normally feed alone, foraging while standing still in water or dropping from flight, or from a perch into water. Sometimes they feed in loose flocks to spot schools of fish easier. Great blue herons prefer shallower waters around 20 in. deep. They feed both night and day, but popular times are around dawn and dusk. The most common feeding method is wading and spearing fish with their sharp bill. Feeding habits can be variable as the great blue heron adapts to different environments easily.

Great blue herons have several calls for different situations. They are most vocal on breeding grounds, giving a “landing call” when they arrive at the nest to greet their partner. They make croaking or honking calls as well that can be a reaction to a disturbance or threat. Chicks will give a call within minutes of hatching and when they are hungry.

Special Notes:
Here in Bella Vista, great blue herons can be seen on all lakes year-round. Many birdwatchers love to watch herons in their natural habitats. The herons are usually by the shoreline and if spooked will probably give a honking or croaking call and fly to a different part of the lake. A local ‘resident’ can be found hanging around the heated fishing dock on Lake Avalon that does not get spooked easily. He is a known thief, so protect your catch. In fact, this bird was observed attempting to consume a 3 pound largemouth bass.